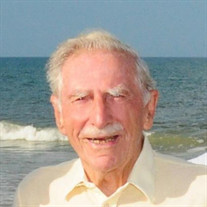 In true Alan Robinson fashion, Alan prepared his Obituary in advance of his passing. This is Alan’s story, as told by him. Alan Robinson of Palm Coast, FL passed away after a short illness on December 17, 2021 surrounded by family. Alan was born on November 14, 1925 in Manchester, England – the world’s first industrialized city - to Priscilla Mary and Henry Robinson. He was predeceased by his parents, and siblings Jean Bowes and Harry Robinson. Alan was educated at technical schools including the Royal Technical College, Salford, England, and subsequently became a Chartered Engineer and a member of the Institution of Mechanical Engineers, UK. He was employed by British and American companies in the UK and Australia as a designer of food-processing machinery and in 1956, by the United Nations Children’s Fund, UNICEF. As a Food Conservation Engineer and as an international civil servant he provided technical assistance to nutrition-related projects in many developing countries, while living in NY, India, and Uganda before retiring in 1985. From an early age, he was outdoor-oriented and joined the Boy Scouts Association before he was 11 and resigned as a leader, 20 years later. Always a keen sportsman, he dabbled with cricket, football (soccer), boxing, tennis, badminton, skiing and golf. His hobbies included hill walking, backpacking, gardening and stamp collecting. Alan enjoyed writing, including correspondence with friends met during his travels in over 100 countries; some endured for over 70 years. In 1942, Alan’s fellow apprentices voted him to receive the engineering company’s annual prize for a combination of scholarship, workmanship, friendship and sportsmanship. Although it was wartime, a high-ranking staff member of the Ministry of Education in London, made the presentation. Subsequently a reporter from the Manchester Evening News interviewed him for their same-day edition of 4 pages, included a subheading entitled, “He Wants to Travel the World”. Alan’s documentation records that subsequently, he lived, worked and vacationed in over 100 countries and flew over 1,000,000 miles, including trips on the Concorde and the Queen Mary II. His travel adventures included a 1950 journey from Manchester, England, to Sydney, Australia in a small, 17-year-old car covering 10,477 miles by road or tracks and 6,293 miles by sea, as well as an 8-day journey by train/ferry from London to Beijing, China. Alan arrived from New Rochelle, NY to become a Palm Coast resident in January 1994. He soon discovered that one of the easiest things to do was to make friends. This resulted in soon becoming an associate member of the Italian-American Social Club, a member of the Irish Social Club and a member of the Knights Golf League. He enjoyed voluntary activates including English-language tutoring for newly-arrived immigrants, gardening at the Italian-American Club and washing dishes at the Knights of Colum bus. He also was an extended-family handyman. Alan met his German wife Ingeborg Robinson in Majorca, Spain in 1963 and they were married the same year on December 14th in Osnabrueck, Germany. She survives him together with their daughters Anya and her husband Dave, Sandra and her husband George, and son Gary. He also leaves behind 5 grandchildren, Gabriella, Andreas, Sophia, Jake and Susanne. As Alan requested, there will be no formal arrangements. In lieu of flowers, please consider donating to UNICEF, a local Humane Society or a local hospice.

In true Alan Robinson fashion, Alan prepared his Obituary in advance of his passing. This is Alan&#8217;s story, as told by him. Alan Robinson of Palm Coast, FL passed away after a short illness on December 17, 2021 surrounded by family. Alan... View Obituary & Service Information

The family of Alan Robinson created this Life Tributes page to make it easy to share your memories.

In true Alan Robinson fashion, Alan prepared his Obituary in...

Customized sympathy cards. Mailed for you.