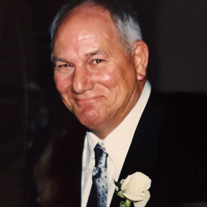 Anthony M. Ippolito, 75, passed away on April 26, 2020 in Palm Coast, FL. Those who knew Anthony "Tony" Ippolito will remember an incredibly proud patriot and Army Vietnam Veteran. He greeted every military member and fellow veteran with a hug and heartfelt thank you, followed by a long and friendly conversation. Despite being plagued with severe Agent Orange-related medical issues during his final years, he remained proud of his Army service and that time in his life courageously serving his country in Vietnam. Tony spent most of his career in the construction industry. His personal life was filled with a passion for renovating and fixing absolutely anything and everything. He enjoyed finding house projects to transform into beautiful homes for his family. An expert in the construction industry, he was widely known as the go-to reference for anyone who needed advice, as well as a helping hand on whatever project was before them. Tony was very proud of his children and grandchildren, evidenced by the wall to wall photos of good times throughout his home. He would regularly and openly share their accomplishments, big and small, to anyone he met. Known as “Dad” to more than his own children, he would lend an ear to anyone who needed someone to listen. Over the years, the continued connection to his growing circle of family and friends made him smile. Perhaps no one was loved by Tony more than his wife Alice. This past November they celebrated 51 years of marriage, his proudest and most cherished accomplishment and life event. Tony is survived by his wife Alice, his children Anthony Jr., Jennifer (Bruce), Brian, and Nicole (Dan), his grandchildren Katie, Matt, Steven, Daniel, Anastasia, and Abigail. He was preceded in death by his mother Lucy DESANTO Ippolito, his father Anthony Theodore Ippolito A graveside committal will take place, Thursday, July 2, 2020 at Cape Canaveral National Cemetery at 3:00 PM.

Anthony M. Ippolito, 75, passed away on April 26, 2020 in Palm Coast, FL. Those who knew Anthony "Tony" Ippolito will remember an incredibly proud patriot and Army Vietnam Veteran. He greeted every military member and fellow veteran with... View Obituary & Service Information

The family of Anthony M Ippolito created this Life Tributes page to make it easy to share your memories.

Send flowers to the Ippolito family.