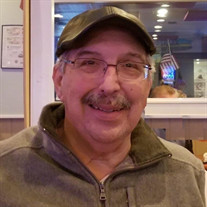 Our Tony left this world on Monday at 8:00am July 26, 2021. He was kind, honest, reliable, caring and always ready to listen. Tony was born in Cleveland, Ohio on April 1, 1944 and attended Eastlake North High School. At age 12, Tony started working. He had a variety of jobs -- delivering newspapers, setting pins, brake factory work and pouring concrete. Ultimately, it was automobiles that became his profession. At age 21, he bought a gas station and drove the tow truck. By age 35 he was selling cars at Spitzer, a Dodge dealership. He moved to Spring Hill, Florida in the 1980’s. He said he’d been very lucky to find a position “selling Buicks to retirees.” Working for Mr. Wes Harris was a highlight of his life. He quickly became a sales manager. Tony was known for his sense of humor, decency and calmness. Customers became regulars and regulars became friends. His final position was sales manager at Pasco Motors in Dade City. He met his current wife, Ann Hutchinson Colling at work. Their first date was of course, the Saturday night Cruise-In. Tony was kind to the children in his life and found joy in time spent with his daughter, Toni Lynn King (Mugsy) and her husband Chuck King. Sarah Oesch had a wonderful relationship with her step-father. Alaina and Deanna King, granddaughters, hopefully will inherit the “Licate Luck.” Regina Asher and her husband Gerald, will miss her brother, whom they called by his baby name, Butch. Tony outlived many who loved him including his parents, Maggie Calabris Licate and Anthony Cosmos Licate; wives, Darlene Everly Licate and Isabel Donovan Licate; and his father-in law, Ray Hutchinson. Ann and Tony were married in 2008. He quickly became a part of the Hutchinson family. He will be missed by Mike, Eileen, Mark, Mary, Hope and Ric. Tony’s retirement was peaceful, living on Treetop Circle in Ormond Beach surrounded by the kindest neighbors. He built 21 model ships while keeping the dogs and cats completely spoiled. He and Ann went on many trips, but he was always ready to return to the happy home they shared.

Our Tony left this world on Monday at 8:00am July 26, 2021. He was kind, honest, reliable, caring and always ready to listen. Tony was born in Cleveland, Ohio on April 1, 1944 and attended Eastlake North High School. At age 12, Tony started... View Obituary & Service Information

The family of Anthony Licate created this Life Tributes page to make it easy to share your memories.

Send flowers to the Licate family.