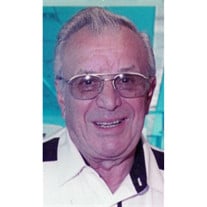 Anthony S. Calanni Anthony “Tony” S. Calanni of Port Orange, FL was born September 29, 1927 in Jamestown, NY to the late Joseph Calanni and Rose Destro Calanni, formerly of Jamestown, New York, passed peacefully on Christmas Day, December 25, 2014, at Halifax Health Hospice of Volusia / Flagler, Port Orange, FL at the age of 87 years. Tony was employed with Jamestown Lounge Company as an upholsterer and retired from Dahlstrom Manufacturing as a tool and dye worker, Jamestown, New York. Tony enjoyed his retirement with his wife while residing in a gated golf community in Port Orange, Florida. Outside of golf, Tony was an avid bowler. He was a near lifelong Jamestown, NY area resident, who previously resided with his wife Nellie-Jo Michalski Calanni. In addition to being preceded in death by his parents, he was preceded by his three sisters; Sarah M. Calanni, Bessie Calanni and Mary Jane Carone. He leaves behind his wife Nellie-Jo Michalski Calanni  of Port Orangge, FL, whom he was married to in the SS Peter and Paul on February 6, 1954.  One daughter, Judith R. Simeone of Huntersville, NC; a son Daniel J. Calanni and wife Helen M. Fitch Calanni of Plano, TX, and a granddaughter Olivia C. Simeone of Portland, OR. A private family memorial was held in Port Orange, FL and an additional memorial service will be held late summer in Jamestown, NY. Arrangements are under the care of Heritage Funeral & Cremation Service, Port Orange, FL

The family of Anthony S. Calanni created this Life Tributes page to make it easy to share your memories.

Send flowers to the Calanni family.