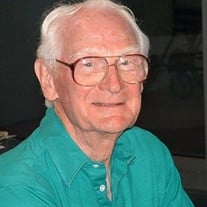 Barry Consett Passman of Ormond Beach, FL, passed away Wednesday, July 4, at the age of 95. Barry was born November 26, 1922 in Teddington, Middlesex, England to Percival and Madeline Passman and immigrated to the United States in 1948. After several jobs in England and the United States he hired into Spartan Industries where he became chief engineer and Vice President of Product Design. He was one of the last self-taught engineers and worked his way up from the bottom. He was preceded in death by his wife, Pauline Passman and daughter Gail Karen Passman. He is survived by three children, Lyn D Lantz (Tom), Susan L Hardy (Monte) and Scott C Passman (Leila), four grandchildren, Shelly Howard (Scott), Karen Baker (Eric Terrian), Brian Szczesny (Kimberly), Sydney Telfer (Jordan), five great- grandchildren and numerous nieces and nephews in England. He is also survived by his furry friends, Katie and Bobby. Barry had a passion for sailing, photography and cars, particularly his 1955 Corvette. When discussing what information he would like published in his obituary, Barry responded as follows: “It would be wonderful if I could say that the world is a better place as a result of my time here; alas I have not produced a great piece of art or written a prize winning book or found a cure for cancer. However, Pauline and I have produced four wonderful children and maybe the offspring will be memorable. I have made many mistakes along the way but I have never knowingly harmed another human being. I have worked hard all my life to provide comfort and support to my family and in my old age I have done my best to help my friends and neighbors. In summary I am an ordinary man and this is my way of saying goodbye to my family and friends.” Per his wishes, Barry has been cremated and there will be no services. He will be interred in Roseland Memorial Gardens in Jackson, Michigan, alongside his wife and daughter

Barry Consett Passman of Ormond Beach, FL, passed away Wednesday, July 4, at the age of 95. Barry was born November 26, 1922 in Teddington, Middlesex, England to Percival and Madeline Passman and immigrated to the United States in 1948. After... View Obituary & Service Information

The family of Barry Passman created this Life Tributes page to make it easy to share your memories.

Send flowers to the Passman family.