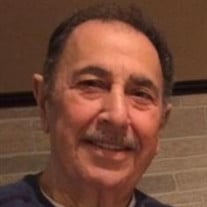 Benjamin Robert Capua Sr., a devoted husband, father and grandfather who had a lauded 28 year-career with the Plainfield Fire Department, went on to be with the Lord, March 25, 2022 in Palm Coast., Fl. At the age of 82. Ben was the second of Anthony and Julia Capua’s five children. Born in Plainfield, NJ, Ben attended Plainfield public schools. He met his future wife, Connie Pompilio Capua, when the two walked together during their 8th grade graduation ceremony in 1954. The pair dated through High School and got engaged after their 1958 graduation. On November 20, 1960, Connie and Ben exchanged vows, ones they’d keep for more than 60 years. The couple welcomed two children, Ben Jr and Robin and eventually settled in South Plainfield, NJ. Ben Sr. Worked as a firefighter with the Plainfield Fire Department and took on many side jobs with fellow firefighters painting houses to provide for his family. The former position allowed Ben to show-off his cooking skills. He specialized in Italian-American fare, including lasagne, Italian hot dogs and sausage and peppers. Ben loved being a firefighter. He received multiple commendations for rescuing people trapped in burning homes. In the early 1970s, Ben was elected as president of the city’s Professional Fire Fighters Union. As union president, Ben negotiated a contract that promised fire fighters hospitalization insurance until their deaths. In May 1986, City of Plainfield ordered all firefighters and fire officials to submit to a surprise urinalysis test. By mid-June, all employees had been tested. The 16 firefighters had results that indicated they had “the presence of controlled dangerous substances” in their urine. They were immediately fired. Ben immediately stepped up to protect his union members. The urinalysis, his union argued, violated the 4th Amendment of the U.S. Constitution, which gives individuals a right to privacy and protection from illegal search and seizure. Ben, a co-plaintiff in Capua v. City of Plainfield. The case made national news and Ben appeared on the cover of Life magazine. The U.S. District Court ultimately sided with Ben and his union. His retirement in 1990 and a move to Florida brought Ben and Connie literally and figuratively closer to their children, and ultimately their 3 grandchildren, Ashley Dudak and Nicole and Ben III Capua. "Pop" as they called him, would take them to school and pick them up everyday while their parents worked. They'd enjoy spending afternoons and summers with him. Ben was a member of the Knights of Columbus as well as The Italian American Club. Ben also enjoyed golfing and spending as much time as he could with his grandchildren. Ben could also be found at Lighthouse Bible Church, a ministry founded by his son-in-law, Ted Dudak. “Pop” enjoyed participating in many of the church's programs and activities. Connie says she and Ben exchanged “I love you” every single morning and every single night.” Ben was predeceased by his parents and his older brother Anthony Capua. In addition to his wife, children and grandchildren, Ben’s survivors include his brother Raffaele Capua and sisters, Marie Capua Jaeger and Carmella Capua McMullen: and many cousins, nieces and nephews. In lieu of flowers, please send donations in memory of Benjamin Capua to Kindred Hospice, 4816 Palm Coast Pkwy. NW, Ste 3, Palm Coast, Fl, 32137 or Lighthouse Bible Church, 15 Hargrove Lane, Bld. 4-Unit D, Palm Coast, Fl, 32137 Arrangements lovingly entrusted to Heritage Funeral and Cremation Service.

Benjamin Robert Capua Sr., a devoted husband, father and grandfather who had a lauded 28 year-career with the Plainfield Fire Department, went on to be with the Lord, March 25, 2022 in Palm Coast., Fl. At the age of 82. Ben was the second... View Obituary & Service Information

The family of Benjamin R Capua created this Life Tributes page to make it easy to share your memories.

Send flowers to the Capua family.