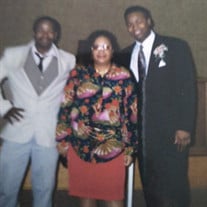 Brenda Joyce Ortiz-Williamson passed away April 8, 2021 under the tender care of Kindred Hospice and her loving son James and her daughter in-law, Molly. Brenda was born to the Ortiz family on October 19, 1945 in Yardley, PA. She graduated from Woodrow Wilson High in Bristol PA. Shortly after graduation, she attended Bucks County Community College taking courses in the Medical field. Adding to her responsibilities, Brenda chose to marry and began starting a family. Her first son came in the fall of 1965, Joseph (Joe) Devont Williamson who she had the misfortune of losing to death just weeks prior to her passing. Her second son, Joseph Michael Williamson was lost tragically at birth. Her third son James Cedric Samuel Williamson came shortly after Joe in the fall of 1967. Brenda had a career as a Social Worker in Bristol PA. She was a compassionate, diligent hard worker and her off hours were just as busy raising two young sons. A few years later in 1971, a daughter was born, Kenya Dieja Williamson. During the 70s' Brenda came in contact with one of Jehovah's Witnesses while at work and she was moved to start studying. She then was introduced to a next-door neighbor while living in Levittown PA. Pat Gilchrist, the two continued Brenda's study and stayed friends for decades, both growing personally and spiritually. Brenda eventually dedicated her life to Jehovah on the same day as her son James on November 25th 2000 at Buckingham Assembly Hall in Buckingham PA. Brenda would remain loyal to her God for the rest of her days. Brenda became a proud grandmother for the first time by way of her son James and his beautiful wife Molly on March 31 1997, Margaux was born and then again on August 13 2000, Seth came into the world. She was a doting grandmother and loved her grandchildren dearly. Brenda was also a sports fan and loved her Super bowl Champion Philadelphia Eagles. We will all miss Brenda. We look forward to seeing her warm smile again, after her resurrection. (Rev. chapter 21: 3,4). Brenda is survived by her son James, his wife Molly, her granddaughter Margaux her grandson Seth and her daughter Kenya. Brenda, Jehovah permitting, we will see you again soon in peace and in Paradise. Please Send any Contributions to: https://donate.jw.org/ui/E/donate-home.html#/donate

Brenda Joyce Ortiz-Williamson passed away April 8, 2021 under the tender care of Kindred Hospice and her loving son James and her daughter in-law, Molly. Brenda was born to the Ortiz family on October 19, 1945 in Yardley, PA. She graduated from... View Obituary & Service Information

The family of Brenda Joyce Williamson created this Life Tributes page to make it easy to share your memories.

Send flowers to the Williamson family.