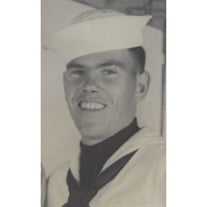 Brian Casey Brian Casey age 82, passed away peacefully at his home in Edgewater, FL on July 26, 2012.   He was born in Glendale, CA to the late John and Marguerite Ward Casey.  With his family he moved to South Florida in 1940, and later to Edgewater in 2002. At the outbreak of the Korean War in June 1950, he enlisted in the US Navy continuing a family tradition of naval service.  Both his father and mother served in World War I, and his brothers in World War II.  He was a proud Dad when his sons John and Mark followed in his footsteps and enlisted in the US Navy. After his navy service, Brian was still drawn to the sea and worked for many years on the tug boats in Port Everglades, Ft Lauderdale, FL.   He was happiest walking the beach, he enjoyed the Miami Dolphins, watching the horses run at the race track, traveling and camping. He is survived by his loving and devoted wife of 40 years, Mary Ramos Casey, six children, Mary Catherine Casey Martinez, Major Joe Martinez of Tallahassee, FL, John Casey, Kelly of Cooper City, FL, Scott Casey, Kim of Eugene, OR, Mark Casey, Monica of Jacksonville, FL, Terry Casey of Eugene, OR, and Erin Kate Gordon of Eugene, OR.   Seven grandchildren, Mary-Sylina Casey Martinez,  Joseph A. Casey Martinez,  John A. Casey Martinez,  Kayleen Casey,  Brian Casey, Miles Gordon, and Sean Gordon.  Three great grandchildren, Evena Christine Martinez, Eden Marie Martinez, and Joseph A. Casey Martinez.  Brian is also survived by his sister Sheila Boyer of Jensen Beach FL, and his brother Terry Casey of Honolulu, HI. Brian is preceded in death by his sister Patricia Little and his brother Shaun Casey. Private services will be held at a later date and time. Memorial donations may be made in Brian's name to the Alzheimer's Association, 378 Center Point Circle, Altamonte Springs, FL 32701. All arrangements under the direction of Heritage Cremation and Memorial Chapel, Port Orange, FL

Brian Casey Brian Casey age 82, passed away peacefully at his home in Edgewater, FL on July 26, 2012. &#160; He was born in Glendale, CA to the late John and Marguerite Ward Casey.&#160; With his family he moved to South Florida in 1940, and... View Obituary & Service Information

The family of Brian Casey created this Life Tributes page to make it easy to share your memories.

Brian Casey
Brian Casey age 82, passed away peacefully at his...

Send flowers to the Casey family.