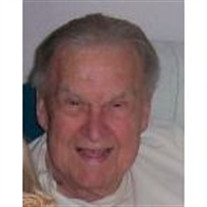 CR “Bud” Hatton Cecil Richard “Bud” Hatton of Port Orange, FL and Prestonsburg, KY was born in Russell, KY to the late Jay G. Hatton and Mame Davis Hatton.  Bud, age 90, passed very peacefully from this earth to his Heavenly home on November 29, 2013 with his loving wife of 33 years, Billie, at his side. After graduation from Ashland High School, Ashland, KY, Bud entered the US Army and served during World War II until receiving an Honorable Medical Discharge in 1944.  He then attended the Mortuary Science College in Louisville, KY and became a licensed mortician and funeral director, practicing for several years at Ryan Funeral Home in Martin, KY. Bud was a well-known insurance agent in the Commonwealth of Kentucky and was the sole owner of Hatton Insurance Agency in Prestonburg, KY for over 50 years. Coal Industry endeavors, real estate and construction projects were also successful undertakings during his life. Bud could keep you laughing with tales of his life experiences.  Football, basketball and horse racing were important to him.  His greatest loves however, were his four precious grandchildren who called him Pop Pop.  They could put a smile on his face during his darkest hours. He was survived by his beloved wife, Billie Crow Hatton, a daughter, Gilva Kay Hatton of Corpus Christi, TX, step-son, Chris Hedges and Amber of Dry Ridge, KY, four grandchildren; Jacob of Amelia, OH, Olivia, Emery and Toby of Dry Ridge, KY. He was preceded in death by a son, Richard Hatton, eight siblings and his parents. In lieu of flowers, donations may be made in his name, Cecil Richard Hatton to Halifax Health Hospice of Volusia/Flagler, 3800 Woodbriar Trail, Port Orange, FL  32129. A memorial service to celebrate the life of CR “Bud” will be held at 4:00 p.m., Thursday, December 5, 2013 at Halifax Health Hospice of Volusia/Flagler Chapel, 3800 Woodbriar Trail, Port Orange, FL. Additionally, a final celebration of life memorial for Bud will be held at a later date in Prestonsburg, KY. All arrangements are under the care of Heritage Funeral & Cremation Service, Port Orange, FL

The family of CR "Bud" Hatton created this Life Tributes page to make it easy to share your memories.

Send flowers to the Hatton family.