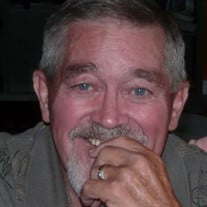 Loving husband and father, Charles (Chuck) Curran, age 75, of Palm Coast, FL, went home to be with Our Lord on Good Friday, March 30, 2018, at Florida Hospital Flagler following a lengthy series of illnesses which began with his major heart attack in 2011. Since then, Chuck has experienced failing health which took a huge toll on his enjoyment of life. Chuck graduated from Crawfordsville High School, class of 1960, in Crawfordsville, Indiana and then enlisted in the Navy during the Vietnam War era. He proudly served over 20 years in the US Navy obtaining the rank of Chief Petty Officer and Builder Chief, for which he was extremely proud. The US Flag always few on flagpole in front of every home occupied by CPOC Curran, USN Retired. Chuck was preceded in death by his parents, Betty Jane Carmen and Charles E. Curran. He is survived by his loving spouse of 13 years, Cheryl Ann Curran, also of Palm Coast, a brother, Larry Curran and his wife Carol, of Ormond Beach, a sister Charlotte Curran of Crawfordsville, and a sister Linda Burnette and her husband Randy also of Crawfordsville. Chuck also is survived by a daughter, Sherry A. Peterson, a daughter Kelly L. Stanbary, a son Craig A. Peterson, a son Jon Casey Curran, and grandchildren, Kira Curran, Hunter Curran and Wyatt Curran, as well as many very special nieces and nephews all of whom he loved very much. Chuck's hobbies were fishing, shooting pool and watching his favorite teams, the Cubs and the Bears. He also enjoyed motorcycling with his wife, Cheryl, in their Honda Gold Wing. In lieu of flowers the family suggests donations be made to the American Heart Association either on line at https://donatenow.heart.org or by phone at 1-800-AHA-USA1. A graveside military funeral will be held at a later date at the Cape Canaveral National Cemetery with full honors. Online condolences may be made at www.heritageflagler.com. Heritage Funeral and Cremation Service. My dearest Chuck, may you always have "fair winds and following seas."

Loving husband and father, Charles (Chuck) Curran, age 75, of Palm Coast, FL, went home to be with Our Lord on Good Friday, March 30, 2018, at Florida Hospital Flagler following a lengthy series of illnesses which began with his major heart... View Obituary & Service Information

The family of Charles E. Curran created this Life Tributes page to make it easy to share your memories.

Send flowers to the Curran family.