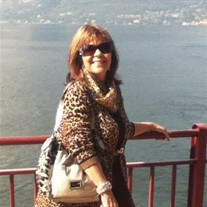 Christine J. Peditto, 64, passed away at the Stuart F. Meyer Hospice House on September 24, 2017. Christine was born in Taylor PA July 28th, 1953. She was a devoted wife, mother and grandmother. Christine was first detected having lung cancer in 1999, since then she fought and defeated cancer three more times, finally losing the battle on September 24, 2017. During that time she never complained and until the very end maintained a positive attitude and showed her love for her Lord and family. She was preceded in death by (her father, Edwin Jones, Mother Gertrude Jones, and Brother Ed (Teddy) Jones) Christine is survived by her husband Victor of 41 years, Her sister Sandy, and her brother in law Robert Davis Her sons Michael (Lisa), and Matthew, Daughters Vicki(Jenny) and Allison, Grandchildren Juliette and Antonio at home Ernesto, Marcello, Megan, Michael John, Amie, Alyssa, Joshua, and 6 great grandchildren A memorial service will take place at 12:00 noon, Monday, October 2, at Parkview Baptist Church, Palm Coast, FL. In lieu of flowers, please make donations to the charity of your choice

The family of Christine J. Peditto created this Life Tributes page to make it easy to share your memories.

Customized sympathy cards. Mailed for you.