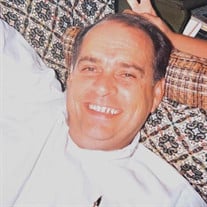 D. Ray Harding Jr., 79, of Ormond Beach passed away peacefully Wednesday, March 23, 2022 at Halifax Health Hospice of Ormond Beach, Florida. Ray was born on November 12, 1942 in Henrietta, North Carolina to the late Dennis Ray and Virginia Harding. Ray graduated from the University of North Carolina, Chapel Hill Class of 1965. After a successful year of Law School at UNC, he enlisted in the U.S. Airforce where he attended the Officer Training School. Ray loved his country with all his heart and served proudly. He received orders for the Air Force Intelligence in Denver, Colorado however soon suffered a life changing stroke at the young age of 24. Ray was determined to overcome his limitations and soar higher than anyone could imagine, so he changed course and became a successful sales executive for over 30 years with Owens-Illinois in Toledo, Ohio. But that wasn’t the end of his course changes, instead of retiring, he became the founder of Harding and Associates, a consulting firm, for the next decade. Ray enjoyed golf and from the love of this sport he and his wife moved to Ormond Beach, Florida. He also enjoyed watching his beloved Tarheels, hunting, fishing, and spending time with his grandchildren creating the “Papa’s Movie Club”. Ray is preceded in death by his parents and a sister, Carole Varner. Ray is survived by his wife, Sandy; daughters, Liz Carey and her husband, Todd of Queen Creek, Arizona and Emily Abney and her husband Todd of Frisco, Texas; sons, Brian Harding and super-pup, Rosie of Houston, Texas and Mark Harding and his wife, Polly of Asheville, North Carolina; seven beloved grandchildren, Austin, Tyler, Lauren, Teddie and Addie Carey, Grace Abney and Caleb Harding; sister, Vickie Vann of Sumterville, Florida. Ray’s strong will, determination, passion for life, and love for his wife and children will forever be his legacy. A celebration of life will be held in Asheville, North Carolina at a later date. In lieu of flowers donations in Ray’s honor may be sent to Tunnel to Towers Foundation, https://t2t.org/?utm_source=sav&utm_medium=google&utm_campaign=search&gclid=Cj0KCQjw0PWRBhDKARIsAPKHFGgBE1CvdM6OZPttjTrmLKppnfG4iDYmXtUqOoi-qNvRitttHUgVp2QaAjmQEALw_wcB Heritage Funeral and Cremation Service is in charge of the arrangements.

The family of D. Ray Harding created this Life Tributes page to make it easy to share your memories.

Send flowers to the Harding family.