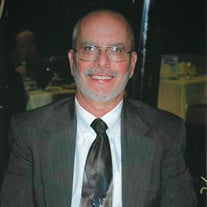 Daniel J. Rogers, 69, passed away on April 12th, 2021 in Palm Coast, Florida. He was born and raised in Dayton, Ohio. He graduated Carroll High School where he participated on the track team. He then went on to Purdue University studying civil engineering and enrolled in the Navy ROTC. He obtained his degree in 1976 and went on to work at Indiana Department of Transportation where he retired after 30 Years and then went on to work for Indianapolis Testing laboratory for 8 years until 2014. Not long after Leaving ITL, The Corradino Group asked Dan to come work with them, and eventually he retired for good in 2018. Dan was extremely dedicated to his work and the love of Road and Bridge Construction. Admired for his intelligence, wit and work ethic, his reputation preceded him. Dan made many friends through the years and earned the respect of all his peers. Dan was very professional when it came to his work and everyone knew that when Dan was in charge, he was a no-nonsense kind of man. He was well respected by all for that. Dan was also a Volunteer Fire Fighter in Martinsville, Indiana for 12 years. He always had great stories to share about his firefighting days. Dan became a father for the first time to his pride and joy, Emily in 1995. They shared many common interests including their love for soccer. Dan met his current wife Charity in 2003. They later married in 2016. They relocated to Palm Coast, Florida in 2018 where Charity currently resides. Dan has always been an animal lover. His birds and cats meant the world to him, especially Charlie bird and Trooper. They brought so much joy to each other’s lives. Dan enjoyed a good bourbon as well as spending time at home in his workshop building different pieces of furniture that so many people admired. Another one of Dan's interests was flying RC planes. He received his certificate on December 15th 2020 and he spent his free time at the air field as often as possible. He was the beloved son of the late Joe W. Rogers and Mary S. Prather. Daniel is survived by his beloved (Wife) Charity, (Daughter) Emily 25, (Step Children) Britany 32, Craig 30, and Casey 29 (Sister) Cathy Kroger (Mike) (Nephews) Alex 29 and Danny 29. His Aunt Helen, Cousins- Brenda, Carl, Marian, Mike, Jeff and Steve. There will be a memorial held for Dan on May 15th, 2021. Please join us for an end-of-life celebration. Dan would have wanted laughter, many jokes, humor, and a responsible adult present! Heritage Funeral and Cremation Service is assisting the family.

Daniel J. Rogers, 69, passed away on April 12th, 2021 in Palm Coast, Florida. He was born and raised in Dayton, Ohio. He graduated Carroll High School where he participated on the track team. He then went on to Purdue University studying civil... View Obituary & Service Information

The family of Daniel J Rogers created this Life Tributes page to make it easy to share your memories.

Send flowers to the Rogers family.