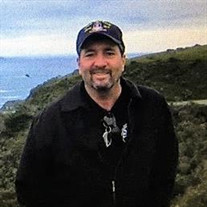 David "Dave" Allen Niesse, 59, passed away at the Stuart F. Meyer Hospice House on April 15, 2018. Dave was born on August 1, 1958 in Watertown, New York. During his childhood, he lived in Watertown, New York and Hollywood, Florida. He graduated from Cooper City High School in Cooper City, Florida in 1976 and worked as a mechanic up until 1983 where he was then employed as a lineman with Florida Power & Light up until his passing. Dave was a hard working and dedicated Florida Power & Light lineman for 35 years. He and his family moved up the eastern coast of Florida, residing in Hollywood, West Palm Beach, Stuart, and Saint Augustine. In 2006, he moved to Palm Coast, Florida where he resided until his passing. His hobbies and interests included boating, fishing, beach, Corvettes, motorcycles, racing, landscaping, music, and animals. Dave was preceded in death by his grandfather, William H. Pritchard, his mother, Anna Mae Niesse, his father, Bernard J. Niesse, his uncle, William D. Pritchard, his grandmother, Minna Pritchard, and his beloved dog, Casey. Dave is survived by his daughter, Samantha Niesse Foley and her husband, Christopher Foley of Aurora, Colorado, his sister, Karolyn Neat and her husband, John Neat of Green Cove Springs, Florida, longtime friend, Cindy Meyers of St. Augustine, Florida, neighborhood friend, Phyllis Mallar, and countless other friends who he considered family. A celebration of life will be held on Saturday, April 21, 2018 from 4:00-8:00 p.m. at his home 69 Utica Path, Palm Coast, Florida 32164. In lieu of flowers, the family asks for donations in Dave's name to the Flagler County Humane Society.

The family of David A. Niesse created this Life Tributes page to make it easy to share your memories.

Send flowers to the Niesse family.