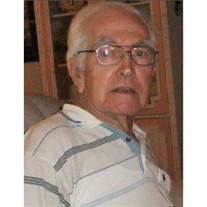 Donald Roger Dresser Donald Roger Dresser, of New Smyrna Beach, FL was born on May 26, 1931 in New Smyrna Beach, FL to the late James Earl and Winnie Mae Dresser nee Ridge. He passed away on January 5, 2013 at the Southeast Volusia Care Center, Edgewater, FL at the age of 81years. He was a graduate of New Smyrna Beach High School, and as a young boy started delivering newspapers for the Daytona Beach News Journal. Donald ended up retiring from the Daytona Beach News Journal as the District Circulation Manager after 67 years of service. He attended Edgewater Baptist Church, and was a Christian man. Donald was an avid fisherman spent many hours, logged many miles, and caught many fish on his boat, the “Ante-Up”. Donald enjoyed Gator football games, and he called each of his sons with each score if they were not watching the games together; he loved his family very much. Donald is survived by his loving wife of 63 years, Mary Ann Dresser of New Smyrna Beach, FL. Two sons, Mike Dresser of New Smyrna Beach, FL, and Matt Dresser and wife Erin of Indian Harbor Beach, FL. Sister, Shirley Brantley of New Smyrna Beach, FL. Five grandchildren, Donald, Marcee, Chris, Dylan, and Kailin. One great grandchild, Zoey, and numerous nieces and nephews. Donald was preceded in death by his son, Mark Dresser, and his brother, Neal Dresser. A Memorial Service celebrating the life of Donald will be held at a later date. All arrangements are under the direction of Heritage Funeral & Cremation Service, Port Orange, FL.

The family of Donald Roger Dresser created this Life Tributes page to make it easy to share your memories.

Send flowers to the Dresser family.