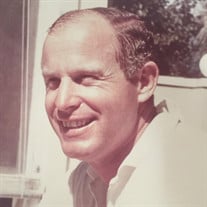 Hammock Dunes, Palm Coast, FL — Earle Eugene Baruch Jr, 84, died Wednesday, April 5, 2017 at Steward Meyer Hospice House in Flagler Beach following a brief illness. He leaves his wife of 63 years, Macy (Mimi) Dewey Baruch; his daughter Lyn Baruch Hickey, and sons Earle Baruch III (Jen), Philip Baruch (Cheryl), grandchildren Jessica Hickey Becker, Christina Hickey, Andrew Hickey, Colin Hickey, Philip Baruch Jr, Sean Baruch, Nic Baruch and Max Baruch and great grandchild Henry Thomas Becker. He is also survived by his sister Elaine Kent, many nephews, nieces, and close friends. Born and raised in the main line of Philadelphia, the son of Earle and Phylis (Fox) Baruch, he was a 20-year resident of Hammock Dunes. After graduating from Kent School, he graduated from Princeton University, followed by a Juris Doctorate from Temple law school. His work career started in the practice of law, but ultimately settled on a career as an international management consultant. He retired from day to day work at age-50 focusing on his investments and real estate. Earle was a life-long golfer with membership at prestigious golf clubs including the Royal and Ancient Golf Club in Scotland, Pine Valley, Merion Golf Club, Quail Valley, Johns Island, Debordieu, Hammock Dunes, Ocean Hammock, Long Cove and others. He was the General Chairman of the US Open in 1971 and served on the Financial Board for the USGA. In his later years, it was very common for him to shoot well under his age. While golf was his passion, he loved his wife and his children even more. He was the rock for the family, deeply loved by those who knew him, always there for his children and friends. He will be missed. A funeral service will be held April 13 at Trinity Presbyterian church at 11am. In lieu of gifts, it is asked for donations to be made to the local First Tee in your community in honor of Earle E Baruch Jr. Heritage Funeral and Cremation Service is assisting the family.

The family of Earle E. Baruch created this Life Tributes page to make it easy to share your memories.

Send flowers to the Baruch family.