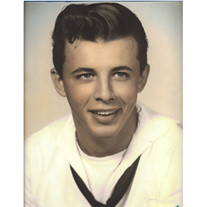 Edward C. Smith Edward C. Smith, age 73, entered Heaven to be with God and family on May 28, 2014 after a dignified and courageous battle with cancer. He was born April 4, 1941 the fourth son of Elmer J. Smith, Sr. and Hazel M. (Tyrrell) Smith. He attended schools in Gloversville, NY graduating in 1959.  He enlisted in the U.S. Navy in 1960, spending a lengthy period of service in Cuba.  After an honorable discharge from the U.S. Navy in 1965, he worked in the field of construction for several local businesses in the Gloversville, NY area.  He relocated to San Jose, CA in the late 1960's and was employed in the automotive division with the Sears & Roebuck Company until his return to the New York area in 1981.  He married his wife, Leslie (Fonda) Smith, March 20, 1993, and moved from New York to Florida in 2001 where Ed worked as a property manager and self-employed carpenter until his retirement due to illness. Ed possessed the ability to make even unwilling people smile.  A quick wit and a good story guided him through each day, and he shared both with everyone he met.  His sense of humor served him well during his tenure as Governor of the Gloversville Moose Club, a position he was most proud to have held.  His love of NASCAR, provided ample material for stories shared with the many friends he was blessed to know. "It's simple - a chair on the beach, a cold beer, a good joke and somebody you love to laugh with - that's the secret, kid." He is preceded in death by his parents, infant twin sons, Raymond C. and Edward C. Smith, Jr.; and a brother, Elmer J. Smith, Jr. In keeping with Ed's wishes, there will be no calling hours or services. In addition to his wife, Ed is survived by an extensive family; his step-children, Tina M. Shults of Port Orange, FL and Wayne R. Shults of Port Orange, FL, and step-grandchildren, Abigail Shults, Savannah Abrams, Emily Shults and Kaleb Shults, of Port Orange, FL;  his son and daughter-in-law, Charles J. and Melissa (Buhr) Smith, and grandchildren Rylan and Jolee Smith and Arissa  Bosworth of Goodyear, AZ; his son's mother, Karolyn (Budrow) Gaydusek; his brothers and sisters, Jacob L. Smith of Temecula, CA; Gary R. Smith, of Gloversville,NY; Marsha M. (Kurt) Schaefer of Medina, OH; Judith A. (Louis) Falanga of Rochester, NY; Susan J. (Arthur) Morrison of Mayfield, NY, Gail M. (Robert) Patterson and Pamela R. (Charles) Frascatore of Gloversville, NY; as well as many nieces, nephews, great-nieces, great-nephews, cousins and those friends whom he considered extended family. A celebration of life will take place at a later date. Memorial contributions can be made to the Halifax Health Hospice of Volusia/Flager, 3800 Woodbriar Tr., Port Orange, FL 32129 or by visiting  www.hovf.org/donate. Thoughts and condolences may be shared with the family by visiting  www.HeritageDaytona.com. Arrangements are under the care of Heritage Funeral and Cremation Service, 620 Dunlawton Ave., Port Orange FL

Edward C. Smith Edward C. Smith, age 73, entered Heaven to be with God and family on May 28, 2014 after a dignified and courageous battle with cancer. He was born April 4, 1941 the fourth son of Elmer J. Smith, Sr. and Hazel M. (Tyrrell) Smith. He... View Obituary & Service Information

The family of Edward C. Smith created this Life Tributes page to make it easy to share your memories.