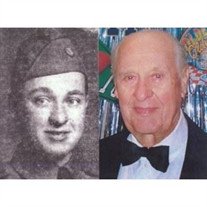 Edward Richard Dytko Edward Richard Dytko died peacefully at home on Saturday, July 19, 2014 after a long fulfilling life.  He was a truly wonderful man who had accomplished much in his lifetime and loved by so many.  He will be missed tremendously by all whose lives he touched. Born October 11, 1921 in Salem, CT, he attended a one-room elementary school in Salem and went to high school at Norwich Free Academy in Norwich, CT. During this time, he was growing up on the family farm and helped his family maintain it.  After high school, he enrolled in the University of Michigan, obtaining a Bachelor’s Degree in Aeronautical Engineering while also being enrolled in the ROTC. After graduation from Michigan (1943), Ed joined the service as a Second Lieutenant and reported for duty as a combat engineer in the 1361st Engineering Company.  As the leader of a mostly black unit, his unit earned many honors and had the opportunity to build the Morganton/Lenoir Airport runway, build in five combat zones and Ed earned a Purple Heart and Silver Star. Once back in the U.S.A., the G.I. Bill afforded Ed the opportunity to attend Harvard University and then move on the Massachusetts Institute of Technology where he obtained his Master’s Degree.  Areas of specialty were Aeronautical Engineering and Nuclear Engineering. After finishing college, Ed worked for Bell Aircraft developing the X-1 through X-5 supersonic aircraft and air-to-air missiles.   He had the honor of working with Chuck Yeager and Jimmy Doolittle during this period. He worked for Allied Research Associates and was involved in studying weapons effects and was involved in the development of the atomic bomb.  Ed then moved to the company from which he would finally retire, Pratt and Whitney, where he headed up the Research and Development division and was proud to claim to be one of the principle designers of the JT9D aircraft engine which is now FAA certified as the PW4000 series and is used on 747 Jumbo Jets. Ed worked extremely hard.  While working full-time, he also had a beef ranch that he inherited from his parents and typically had around 70 head of cows.  All the while, he helped raised four children and still had time for things he enjoyed.  He not only worked hard, he played hard also.  He loved flying, golfing, riding motorcycles, playing baseball, boating, and waterskiing.  His biggest love was flying.  He got his Private Pilot’s license, obtained his Commercial, Instrument, and Airline Transport ratings. He was also certified as a multi-engine instrument Flight Instructor.  He flew all over the U.S., and was known as one of the toughest Flight Instructors anyone could learn from. One of his dreams was to own his own airplane, a nice home and live on an airport.  When Ed put his mind to something, he would not stop until he accomplished it.  He achieved buying several airplanes in his lifetime and owning homes with hangers within easy taxiing distance to the runway.  The first was in Bull Hill, CT and the second in Spruce Creek Fly-in in Port Orange. FL. At retirement, Ed did not stop being active in the community.  He served on the Board of Directors for the Spruce Creek Homeowner’s Association, served on the Board of Directors at the local YMCA and served on the Board of Trustees at Embry Riddle Aeronautical University. Ed is the son of Kathryn Gosztyla Dytko and Joseph Dytko who migrated from Poland.  He married Gertrude (Trudi) Sullivan Dytko and has four surviving children: Sally Dytko Haddad (husband is Chuck Haddad), Laura Dytko Buchkovich (husband is Steve Buchkovich along with two children), Edward (Chip off the old block) Dytko with two children, and Kathryn (Kate) Dytko Williams with one child.  Also surviving Ed are his three nephews, Jack Dytko Paul Dytko and Peter Noonan.  After his first wife, Trudi, passed, Ed married Fern Haley Dytko who still lives in Spruce Creek and has been a wonderful and loved addition to the Dytko family, also left to cherish Ed’s memory are Fern’s son Daniel Haley of Wisconsin, Brian Haley(Jackie) of Wisconsin, Peter Haley of Ponce Inlet, FL and daughter Christine Coepsel (Mark) of Georgia  Ed had three siblings: John Dytko, Julie Dytko Faulkner, and Barbara Dytko Noonan who are all now deceased. Ed will always be remembered as a Soldier, Scientist, Engineer, Civil Rights Activist, Aviator, Wonderful Father, Perfect Husband and Stubborn Pollock. A Funeral Mass will be held on Saturday July 26, 2014 at 1:00 pm at Our Lady of Hope Catholic Church, 4675 S.Clyde Morris Blvd, Port Orange, FL 32129 with a special gathering of family and friends afterwards at the Dytko residence. In lieu of flowers, please send a donation to the American Cancer Association. Thoughts and condolences may be shared with the family by visiting  www.HeritageDaytona.com Arrangements are under the care of Heritage Funeral and Cremation Service, 620 Dunlawton Ave., Port Orange FL

The family of Edward Richard Dytko created this Life Tributes page to make it easy to share your memories.

Send flowers to the Dytko family.