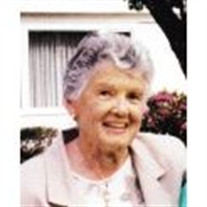 Eleanor T. Peterson Eleanor T. Peterson, 94, of Palm Coast, FL, was born in West Haven, CT on December 17, 1919 and passed away November 18, 2014. Eleanor was a fiercely independent and strong willed woman. She was greatly admired and respected by her family and friends. She enjoyed reading mystery novels, playing golf and watching tennis on television. Eleanor attended West Haven High School where she received her diploma and continued her education at Mount Holyoke College. She then moved on to New York, NY where she accomplished her dream and Graduated from Katherine Gibbs Secretarial School. Eleanor then began her career as the Executive Secretary to several elite individuals such as the President of Rockefeller Foundation and the President of Electrolux Corporation. Eleanor moved to Palm Coast, FL in 1984 where she continued a very active life. She was a member of the Trinity Presbyterian Church, Palm Coast, FL, Friends of the Library, Palm Coast, FL. She is preceded in death by her parents, Harry C. and Helen N. Tolles, brother, Edward Tolles and former spouse, O. Martin Peterson. She will be forever missed by her son, Jon Peterson and his wife Glenna of Palm Coast, FL as well as many friends in the community. There will be a Memorial Reception for Eleanor’s family and friends on Friday, December 12 from 2 until 4 PM at the Trinity Presbyterian Church, 156 Florida Park Drive, Palm Coast. Senior Pastor Dr. Ron Watson will make remarks at 2 o’clock. Anyone wishing to make a contribution in memory of Eleanor is encouraged to do so for the benefit of The Salvation Army – one of her favorite charities.

The family of Eleanor T. Peterson created this Life Tributes page to make it easy to share your memories.

Send flowers to the Peterson family.