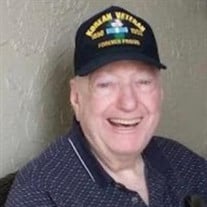 Ernest (Ernie) Moreau of Palm Coast, FL, passed away on April 13, 2022, at Advent Health Hospital with his loving family at his side. The world has lost a true gem, as there was no man stronger, gentler, or more loving, and who cared so deeply for his wife, children, children-in-law, grandchildren, great grandchild, brother, nieces, and nephews, who were all cherished by him. The youngest of four rambunctious boys, Ernie was the beloved son of the late Joseph and Loretta Moreau of Pawtucket, RI. After graduating from Sacred Heart Academy, he was scouted by the Cleveland Indians, but he declined their offer and instead enrolled in the military. Ernie proudly served in the Air Force during the Korean conflict before being stationed in Texas, where he met Angela (Fausel), his true love and wife of 66 years, to whom he was utterly devoted. Ernie was then transferred to Alaska, where he and Angie began raising their own rambunctious children, their five daughters: the late Terry Thery (Mark Pick) of Roosevelt, NJ; Ann Moreau (Bobby Maltby) of Bunnell, FL; Nancy Moreau of Nashua, NH; Michelle Moreau of Palm Coast, FL; and Jeanette Moreau (Cheryl Wilson) of North Chelmsford, MA. Ernie was a self-made man dedicated to his family and his country. After his discharge from the Air Force, Ernie carved a path for himself in the securities field. He worked in law enforcement, then helped to establish the Fairbanks Security Police, and from there he made the move to the armored car industry. Ernie worked his way up, eventually becoming the owner of his own armored trucking companies in Massachusetts and New Hampshire. After making a promise to himself to never again shovel another inch of snow, Ernie and Angie retired to Palm Coast, FL in 1994, where they have resided since. He stayed active by joining the Palm Coast Chamber of Commerce and Palm Coast Business and Professional Network for a time before deciding to live a life of leisure. He put those early baseball skills to work during lots of rounds of golf and rousing bowling tournaments, frequently dined out with friends, and committed himself to being a fabulous grandfather. Ernie was blessed with the gift of gab and was a born storyteller (have you heard the one about him driving a truck through a Quonset hut?). He was a morning person who greeted each day with a smile on his face, and who whistled away on Saturday mornings while he served up his famous pancakes made with love. He enjoyed a good country western beat and could be heard singing “King of the Road” at any given time. Mostly, though, Ernie loved spending time with his grandchildren Marissa Evigas, Melissa Maltby Klag, Ryan Maltby, Alexis Deleon, and Ashanti and Kiema Wilson-Moreau, and his great grandson Neko Singleton. He also so looked forward to his weekly phone calls and annual visits with his last surviving brother, Ray Moreau (Theresa Moreau), of Cumberland, RI. Ernie was loved and treasured by his wife, daughters, children-in-law, grandchildren, and great grandchild. He was a fun-loving brother, the world’s greatest father figure, and an honorary Pepere to many. He was also a loyal, steadfast man on whom his friends could depend. Ernie will be so missed by all who were lucky enough to have their lives touched by him. A funeral service, to whom all are invited and welcome, will be held on Friday, April 22 at 11:00am at St. Thomas Episcopal Church, 5400 Belle Terre Parkway, Palm Coast, FL. Due to COVID-19 restrictions, no visitation hour will be held, though the family will be happy to greet guests outside after the service. Private interment at Cape Canaveral National Cemetery, with full military honors, will occur at a later date. In lieu of flowers, the family asks that you send a donation in Ernie's name to the American Diabetes Association.

Ernest (Ernie) Moreau of Palm Coast, FL, passed away on April 13, 2022, at Advent Health Hospital with his loving family at his side. The world has lost a true gem, as there was no man stronger, gentler, or more loving, and who cared so deeply... View Obituary & Service Information

The family of Ernest W Moreau created this Life Tributes page to make it easy to share your memories.

Send flowers to the Moreau family.