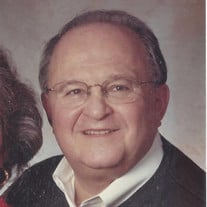 Eugene John D'Iorio Jr., 75, passed away on Monday, January 20, 2020 after a multi-year battle with a rare blood disorder known as Myelofibrosis. He was born on December 22, 1944, in Montreal, Canada, to Eugene John Sr. and Angelina D’Iorio. He earned a Bachelor of Commerce degree at Concordia University in Montreal. He also earned a Master of Business Administration degree at McMaster University in Hamilton, Ontario. Eugene had a very successful career with a specialty in finance. His strong work ethic led him to eventually become a senior executive with experience gained across a number of different industries. His career progression led him on a journey across many North American cities including Montreal, Toronto, Atlanta, Portland, and St. Augustine. He eventually retired in Palm Coast Florida. Eugene thoroughly enjoyed spending time with his family and friends. He lived life to the fullest through his love of sports and was passionate when partaking in his hobbies which included tennis, golf, and playing cards. He was a history buff with knowledge that the ordinary man should not have! In addition he was an avid book reader. He was preceded in death by his Mother, his Father, and his Brother Sam. Eugene is survived by his lovely wife of 49 years, Ada, his brothers Peter and Robert, his eldest son Philip and his wife Danielle, his youngest son Eugene John III and his wife Wendy, and his grandchildren Alyssa and Justin. A service will be held to commemorate Eugene’s life on Monday, January 27, 2020, at St. Elizabeth Ann Seton Catholic Church. A viewing will be held at 10am followed by a funeral Mass at 11am. Heritage Funeral and Cremation Service is in charge of arrangements.

Eugene John D'Iorio Jr., 75, passed away on Monday, January 20, 2020 after a multi-year battle with a rare blood disorder known as Myelofibrosis. He was born on December 22, 1944, in Montreal, Canada, to Eugene John Sr. and Angelina D&#8217;Iorio.... View Obituary & Service Information

The family of Eugene J. D'Iorio created this Life Tributes page to make it easy to share your memories.

Send flowers to the D'Iorio family.