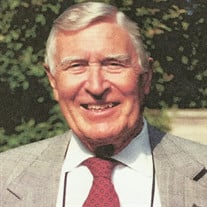 Dr. Frank Wesley Lane Jr., 98, died November 28, 2017 at Florida Hospital Memorial Medical Center in Daytona Beach, Florida. He was born April 2, 1919 to Jean & Frank W. Lane. After graduating from high school, Frank went to Harvard University to study Latin. World War II was declared the following year and he volunteered to join the Army Airforce. Before military activation, Frank began working with x-rays in a medical facility. He was commissioned in 1942 as a 21st lieutenant navigator, and flew in B-24 Liberators. He was lead navigator for his base in the U.K., and was awarded the Distinguished Flying Cross. f After the war, Frank returned to Harvard and took up medicine and focused on radiology. Upon passing his board exam, he joined the Radiology Department at Mary Hitchcock Hospital in Hanover, New Hampshire with extensive radiotherapy treatments on his schedule. Frank recognized the inadequacy of treatment available for cancer patients in the region, and dedicated himself to addressing their needs. Frank began to solicit donations from influential sources, and after an introduction to Norris Cotton, a U.S. Senator for New Hampshire, he found a kindred spirit that championed raising funds from federal sources. The Norris Cotton Cancer Center was completed in 1977 and designated a Comprehensive Cancer Center in 1980. Frank had finally achieved his ambition for a multi-disciplinary treatment and research facility for patients in New England, and was honored in 1979 with The Pettee Medal Award. Upon his retirement in 1987,Frank moved to Florida and indulged in his love of travel. In 2006, he married Elizabeth, a friend of many years. A memorial service will be held at 10:00 AM, at Christ Presbyterian Church in Ormond Beach, FL on Wednesday, December 13, 2017. In lieu of flowers, the family requests memorial donations may be made to the Norris Cotton Cancer Center in Dartmouth-Hitchcock Medical Center . Checks can be made payable to "Dartmouth Hitchcock Health" and sent to: DH Development Office Attn: Jason A. Naugler 1 Medical Center Drive Lebanon, NH 03756 Online donations to the Norris Cotton Cancer Center can be made here: http://cancer.dartmouth.edu/donate/give-online-annual-fund.html

The family of Dr. Frank W. Lane Jr. created this Life Tributes page to make it easy to share your memories.

Send flowers to the Lane family.