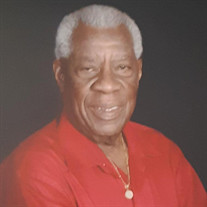 Franklyn W. Thompson passed away on August 21, 2021, at the age of 80. He was born on May 19, 1941, to the late Alfred Thompson and Emily Thompson in San Nicolas, Aruba N.A. He grew up in the Brazil neighborhood and attended the Aruba Technical School. Franklyn immigrated to New York City in 1963 and joined the US Army in 1964 where he attended the U.S. Army Southeastern Signal School. He spoke several languages including English, Spanish, Papiamento, Dutch and German. Shortly after his military service Franklyn started employment with New York City’s electric company Consolidated Edison (Con ED). He attended Mechanics Institute and graduated with the George E Hoe Prize. His dedication, hard work and determination allowed him to excel from Lineman to Chief Construction Inspector. The family moved to New Jersey in 1980 and he retired in 2002. Franklyn served as commander of American Legion Post 58 in Englewood NJ and was a member of the 40&8 Voiture. He also was a member of the NY Antillean Association and the Northeastern Con Edison Retirees. After retirement, Franklyn and his wife Dorothy moved to Palm Coast Florida where he enjoyed his senior years. Together they enjoyed traveling by boat or plane to the Caribbean, Europe and beyond. As a devoted Christian, Franklyn was a member of St. Thomas Episcopal church in Palm Coast Florida where he volunteered for various events and committees. He loved watching soccer and baseball and spent time going fishing (seeking to catch his favorite red snappers). He also enjoyed caring for his home and didn’t give up on attempting to grow orange trees, and tomatoes. He is survived by his loving wife Dorothy Thompson, daughter Yolanda Thompson, brother-in-law Timothy Price, grandsons Jonathan Thompson and Tyrik Christie, and great-granddaughter Carter Ruby Christie (who he fondly called Ruby Carter). Along with a host of beloved nieces, nephews, cousins, and a variety of other family members. He was preceded in death by his brothers Alfred Washington and Constantine (Cons) Richardson both of Aruba. Franklyn Thompson was a proud man and caring person with a big heart. Devoted family man and loved by all who came across his path. He will be missed by a community of family and friends. A Celebration of Life Service will be held at St. Thomas Episcopal Church, 5400 Belle Terre Pkwy, Palm Coast, FL 32137 on October 23, 2021, at 1:00pm. Due to current restrictions, the service will be streamed live on St. Thomas Episcopal Church’s Facebook page. Condolences can be left on Heritage Funeral and Cremation Service website (https://www.heritageflagler.com).

Franklyn W. Thompson passed away on August 21, 2021, at the age of 80. He was born on May 19, 1941, to the late Alfred Thompson and Emily Thompson in San Nicolas, Aruba N.A. He grew up in the Brazil neighborhood and attended the Aruba Technical... View Obituary & Service Information

The family of Franklyn W. Thompson created this Life Tributes page to make it easy to share your memories.

Send flowers to the Thompson family.