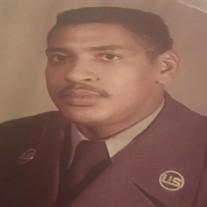 Fred Samuel Galloway Sr. was born on Friday, September 26, 1930 to Anna D. Steele-Galloway and Thomas E. Galloway. To this union four additional children were born. Fred entered eternal rest on Tuesday, July 13, 2021 surrounded by his loving and devoted wife Wilhelmina. His parents, three siblings and two daughters preceded Fred in death. Fred graduated from Logan High School in Concord, North Carolina class of 1949. He continued his education by attending Seminary school. He later joined the United States Air Force and served during the Korean War from 1951-1955. Upon returning home from the war, Fred owned a dry cleaning business in New Jersey for many years. Later, he was hired by Sealand Corporation as a Long Shoreman. Fred was promoted to timekeeper for the company and was proud to have become the first African American to hold the position. After many years with Sealand, Fred retired in the 1990’s. In 1985, Fred married Wilhelmina Bragg. A few years after that they moved to Chester, VA. At an early age, Fred received Jesus Christ at the Lutheran Church in Concord, NC. While living in Chester, Fred joined the First Baptist Church and used his seminary training to volunteer with the prison ministry. In 1995, Fred and Wilhelmina relocated once again to Palm Coast, FL., where they built their home on Frontier Drive. After worshipping at other churches in Palm Coast, Fred finally found a church home that fed his soul at the Lifeway Church in Daytona Beach, FL. He remained a member there until the time of his passing. Fred was an active volunteer, having done so while living in Chester, VA. So, after moving to Palm Coast, he became a volunteer with Citizens on Patrol, the Disabled American Veterans and the American Legion. He was also a member of the social club referred to as “The Hosts of Palm Coast”. Fred leaves a loving family to cherish his memory, wife Wilhelmina Galloway, sons Samuel S. Galloway Jr. (Allison), Frank L. Bragg (Pamela) and Benjamin McMoose; daughter Diana L. Bragg, sister-Anna Galloway Blue, several grandchildren and great-grandchildren, a host of nieces, nephews and many dear friends.

The family of Fred Samuel Galloway Sr. created this Life Tributes page to make it easy to share your memories.

Send flowers to the Galloway family.