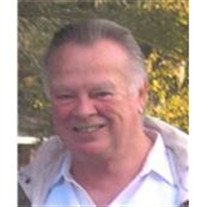 Frederick "Fred" Howard Miller Frederick “Fred” Howard Miller was born on February 18, 1945 in Circleville, OH to the late John O. and Adelaide Miller nee Fissell.  He passed away on September 4, 2012 in Port Orange, FL at the age of 67. Fred served his country during the Vietnam War as an Airman First Class in the United States Air Force.  He relocated to Florida from Ohio in 1967 after his time in the military was complete.  Fred enjoyed fishing, woodworking, and playing blackjack.  He was a kind man who earned the love and respect of everyone he met. Other than his parents, Fred is preceded in death by his sister Arlen Miller and his brother John R. Miller. He is survived by his loving wife Bertha of 34 years, son, Terry Flint of Port Orange, FL, daughter, Nancy Lambert of Port Orange, FL, brothers, David Miller and wife Betsy, and Robert Miller, both of Jacksonville, FL, sisters, Suanne West and husband Robert of Melrose, FL, Adelaide Lacuesta of Virginia Beach, VA, Ruth Ann Gunter and husband Hank of Knoxville, TN, Donna L. Grooms of Suwannee, FL, and Mary Lou Turner of HI, grandchildren, Cheryl, Dusty, Samantha, and Erin, and great grandchildren, Timothy, Owen, and Hunter. In lieu of flowers, donations may be made in Fred’s name to Halifax Hospice of Volusia/Flagler 3800 Woodbriar Trail, Port Orange, FL 32129 All services are under the direction of Heritage Cremation and Memorial Chapel, Port Orange, FL

The family of Frederick Howard Miller created this Life Tributes page to make it easy to share your memories.

Send flowers to the Miller family.