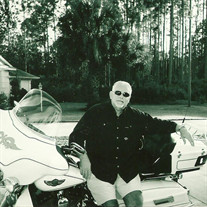 Gary M. Richardson, 62, of Flagler Beach, FL passed away peacefully on May 14th after a long courageous battle with cancer. He was born on April 10, 1956 in Detroit, MI to Gurney and Gloria (McCray) Richardson. Gary grew up in the in the suburbs of Detroit. After graduating from Hazel Park High school, he trained to be a tooling engineer working in the automobile industry for a good part of his life. He was also proud to be a Shriner and enjoyed being part of their Motor Corp. Gary was passionate about variety of sports and collecting related memorabilia. Above all, he was a diehard fan of his hometown Detroit Lions, holding season tickets with them for 21 years. Those who knew him well admired his collection and the lengths he would go to add to it: He once dressed as a janitor and hid a football in a wastebasket, hopping on an elevator with Emmitt Smith as he left a signing session. Another time, he and his cousin Jimmie pretended to be servers on a yacht docked in Daytona Beach to join in on a party after a NASCAR race. They soon were escorted off the yacht but praised for their effort. Outgoing and boisterous, Gary was hard to miss and would light up a room when he entered. He loved dogs and raised a number of rescues over the years. He loved to ride Harley Davidson Motorcycles and events like Bikeweek, especially after moving to Florida in 2004. Once in Florida, Gary felt lucky to hold a handful of jobs in the Daytona Beach area that he really enjoyed: He sold Harley Davidson Motorcycles for Bruce Rossmeyer's dealership, ran a hot dog cart outside of the Daytona Beach International Airport, and worked for Gary Wilbur of The Wilbur Group transporting clients to special events. Gary is survived by his daughter Kelly Richardson and her partner Angie Watson, stepmother Rosie Richardson, stepsister Kimberly (Tim) Church, Uncle James and his cousin Caroline (Michael) Kerhoulas with whom he forged a close bond with after spending the summers with their family in North Carolina as a youth. He is predeceased by his parents, Aunt Mary and his other North Carolina based cousin, Jimmie Richardson, who was more like a brother. A public graveside burial service will be held at Flagler Palms Memorial Gardens on Sat. May 19th at 11 am. The cemetery is located at 511 Old Kings Road South * Flagler Beach, FL. In lieu of flowers, donations should be made in Gary's honor to American Cancer Society at www.donate3.cancer.org * (800) 227-2345 * PO Box 22478 - Oklahoma City, OK 73123 or The Flagler Humane Society at www.flaglerhumanesociety.org/donate/ * 1 Shelter Drive - Palm Coast, FL 32137 Heritage Funeral and Cremation Service is assisting the family with arrangements and service. www.HeritageFlagler.com

Gary M. Richardson, 62, of Flagler Beach, FL passed away peacefully on May 14th after a long courageous battle with cancer. He was born on April 10, 1956 in Detroit, MI to Gurney and Gloria (McCray) Richardson. Gary grew up in the in the suburbs... View Obituary & Service Information

The family of Gary M. Richardson created this Life Tributes page to make it easy to share your memories.

Send flowers to the Richardson family.