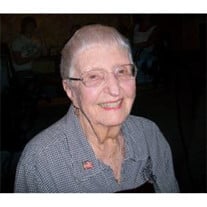 Genevieve "Genie" Russo Genevieve Russo, "Genie", 98 & 1/2, years old of, Brooklyn NY, Miami FL and most recently, Ormond Beach, passed on Sat May 4th, 2013, at Hospice in Port Orange.  A Mass to celebrate her life will be held on May 18th, at 11 AM, at Prince of Peace Catholic Church, 600 So. Nova Rd, Ormond Beach, FL. Genie was born November 15th, 1914, in Brooklyn N.Y., moved to Miami in 1958 with her husband, Michael, now deceased & daughter Nina. She worked with the Public Defender and State Attorney’s office transcribing depositions till she was 70 years old. She moved to Ormond in 2002 with her Daughter Nina, Son-in-law Bill Daly, and Great Grandson Zacharey Porter, and began volunteering every day at Pathways Elementary School, working in the office for 10 years. In 1990 Genie, got a new love of her life, her Great Grandson Zacharey Shane Porter, now SPC Porter an Army Reserve Solider, going on his second tour in Afghanistan December 2013. She has been a contributor to the Disabled American Veterans, the 689th ROUTE CLEARANCE COMPANY, US Army Reserve Unit, which was Zach’s first tour to Afghanistan Unit and the Catholic Church. Her then two year old Golden Retriever service dog, Zappa, yes as in “Frank”, arrived to us, 2 ½ years ago and he has been at her side ever since.  He said his “bye for now’s” in bed with her at Hospice as we all visited for the last time.  He still checks her bedroom each morning to see if she is up yet as he had done so every day since he arrived. She was a vital, active feisty woman, all of her very long life and she continues to inspire all those who knew her. She was dedicated to education, her church and helping others whenever she could.  She is survived by Daughter Nina & Husband Bill Daly, Granddaughter Patricia Porter, Great Grandsons, Zacharey, Paul and Parker Porter. She was predeceased by her Husband, Michael Russo. Memorial donations may be made to the 388th ROUTE CLEARANCE COMPANY, of the US Army Family Reediness Group, that supports the Soldiers and Families deploying to Afghanistan on December 26th, 2013, for a one year tour, and / or the Wounded Warriors Project.  Contact [email protected] for info on how to donate. All arrangements are under the direction of Heritage Funeral & Cremation Service, Port Orange, FL

Genevieve "Genie" Russo Genevieve Russo, "Genie", 98 & 1/2, years old of, Brooklyn NY, Miami FL and most recently, Ormond Beach, passed on Sat May 4th, 2013, at Hospice in Port Orange.&#160; A Mass to celebrate her life will be held on May... View Obituary & Service Information

The family of Genevieve "Genie" Russo created this Life Tributes page to make it easy to share your memories.

Send flowers to the Russo family.