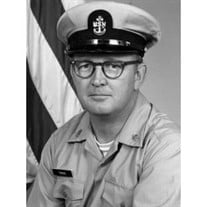 George Patrick Timmons George Patrick Timmons of Port Orange, FL was born on June 9, 1931 in Washington, D.C. to the late Morris Bland Timmons and Ada Elizabeth Timmons nee Gibson.  He passed away at his home, after a long and courageous battle with an illness, on April 3, 2013 at the age of 81 years. George, his childhood sweetheart and wife, Florence, moved from Washington D.C. to Oxon Hill, MD, to Boston, MA, and finally to Zion, IL.  George retired from the U.S. Navy as a Senior Chief Petty Officer in 1972 after serving for over twenty years.  He and his wife relocated to Florida in 1992 where he enjoyed doing crossword puzzles, “tinkering” in the garage, traveling, and driving Floss around town and on Daytona Beach in “Vicki”.  By far, his greatest enjoyment was spending time with his family. In addition to his parents, George is preceded in death by his infant son, James Raymond, daughter, Brenda J. Donnelly, his infant grandson, Steven, and finally his granddaughters; Cathy and Karen. He is survived by his loving wife Floss of 63 years of Port Orange, FL, and his five children; Patricia Ann Lunsford of MD, George Michael Timmons and wife Brenda of NM, Mary Timmons Richter and husband George of IL, Elizabeth Jean Booras and husband John of IL, and Kenneth Joseph Timmons of IL.  Also surviving are eleven grandchildren; Christine, Tasha, Cliff, Jessie, Tom, Katie, Mandy, Alexandra, Evan, Stephen, and Nicholas, and six great grandchildren; Skyler, Logan, Shianne, Toni, Jayla, and Nathan.  George also leaves behind many other family members and friends who will miss him dearly. A memorial service will be held on Friday, June 21, 2013 at 10:00 am from the chapel of Heritage Funeral & Cremation Service 620 Dunlawton Ave. Port Orange, FL 32127.  Friends may visit with the family from 9:00 am until time of service. In lieu of flowers, donations may be made in George’s name to VITAS Hospice Care 2381 Mason Ave. Suite 100, Daytona Beach, FL. 32117, or by visiting www.vitas.com/community/donate.aspx All services are under the direction of Heritage Funeral & Cremation Service, Port Orange, FL.

The family of George Patrick Timmons created this Life Tributes page to make it easy to share your memories.

Send flowers to the Timmons family.