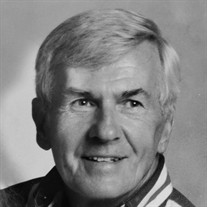 Gerard “Jerry” V. Debaets, Jr., 91, of Palm Coast, Florida, passed away comfortably at home on May 8, 2019. He was born in Huele, Belgium, to Gerard V. Debaets, Sr. and Marguerite (Casterman) Debaets on November 2, 1927. Jerry’s father was a renowned international racing cyclist who won many races at Madison Square Garden in New York City and abroad. Jerry was a veteran of World World II serving in the U.S. Army with the Anti-Tank Company 39th Infantry in Germany. He was employed as an insurance underwriter for 35 years with a major insurance company. Jerry loved the beach, fishing, painting and mastered computing on his Commodore long before most of his family did. He called himself a mover and a shaker with his” rat pack.” Jerry was a loving husband, father, brother, brother-in-law, grandfather and great-grandfather. He is survived by his loving wife of 23 years, Sue: daughters; Vicki Debaets and Terry Pilitzer: brother; Michel (Lucille): brother-in-law ; Allan (Marilyn) Goldberg: Suzanne (Larry) Hunter, Stan (Michelle) Holifield, Jackie (Mike) Hutchins : grandchildren and great-grandchildren. He was preceded in death by his former wife of 38 years, Elayne. Jerry will receive a Military Funeral Honors ceremony at Jacksonville National Cemetery in Jacksonville, Florida, at 11:00 A.M. on Friday, May 17, 2019. In lieu of flowers, the family requests donations be made to AdventHealth Hospice Care, 770 W. Granada Blvd, Suite 304, Ormond Beach, Florida 32174 or to your charity of choice.

The family of Gerard Debaets Jr. created this Life Tributes page to make it easy to share your memories.

Send flowers to the Debaets family.