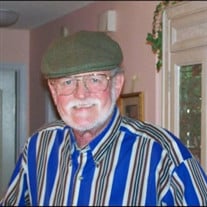 Gerard J. Ihnat, 84, passed away on May 11, 2021 in Palm Coast, Florida. Jerry, as he is best known, was born on March 25, 1937 in Olyphant, PA to Michael E. and Estelle F. Ihnat. At the age of 6, Jerry, his parents, and older brother Eugene moved to the Curtis Bay area of South Baltimore in Maryland. Growing up Jerry was very active in his church as an alter-boy at St’s Peter & Paul Ukrainian Catholic Church. He was also in the Boy Scouts and performed in a Ukrainian Dance Group. While attending Polytechnic High School in Baltimore, where he studied mechanical engineering and drafting, Jerry lettered in Varsity Wrestling. Jerry’s hobbies included wood working, hunting, archery, dancing and traveling. He loved to visit ancient historical sites such as the Parthenon in Athens, Greece. He enjoyed science and especially science based fiction such as Star Trek. Jerry often joked in the 1960’s that he was a distant cousin to actor Steve Ihnat, who played Captain Garth in the Star Trek episode “Whom Gods Destroy”. In later years Jerry learned that his “joke” was an accurate claim. In his late teens Jerry met his future wife, Mary E. Zorabedian. He often tried to impress Mary by squealing wheels in his car while driving in reverse up hill. They were married on November 22, 1958 at St’s Peter & Paul Ukrainian Catholic Church. Together the couple had 3 children – Theresa on June 18, 1959; Michael on December 23, 1960 and Patricia on February 12, 1963. Jerry’s career included a variety of positions. His most frequent job was draftsman for several different companies including Davison Chemical, Bethlehem Steel – Buffalo Tank Division, CM Kemp Manufacturing, Whittiman Corporation and Lockheed-Martin. While at Buffalo Tank Jerry also tried his hand at purchasing agent for the company. Along the way Jerry also worked as an insurance salesman, clerk for Household Finance, customer service rep. at Home Depot and as a courtesy driver Palm Coast Ford before he fully retired. After Mary passed in 2002, Jerry eventually met Joan DiFrancisco of Palm Coast, FL, whom he enjoyed a relationship with until his passing. Jerry was preceded in death by his brother Eugene – 10 years, father Michael – 78 years, wife Mary – 61 years and mother Estelle – 92 years. Jerry is survived by his 3 children: Theresa Sillaman of Goldvein, VA, Michael Ihnat of Orlando, FL and Patricia Hughes of Milton, FL. Jerry has 4 grandchildren – David R. Sillaman, Jr. and Kristina Sillaman, both of Virginia Beach, VA, Robert Ihnat of Orlando, FL and Michelle Ihnat of Winter Park, FL. He also has 5 great-grandchildren: Makayla and Dera Stiltner of Virginia Beach, VA, Evelynn Barber and Caleb Swearingen of Winter Park, FL and Caitlynn Ihnat of Oklahoma City, OK. Celebration of life service will be at 12:00 PM on Wednesday May 26, 2021 followed by mass at 1:00 PM. Location is: St. Elizabeth Ann Seton Church 4600 Belle Terre Pkwy Palm Coast, FL 32164 Following the mass there will be a reception at Pines Lakes Golf and Country Club The family requests in lieu of flowers, please make a charitable donation to the American Heart Association. Heritage Funeral and Cremation Service is assisting the family.

The family of Gerard J Ihnat created this Life Tributes page to make it easy to share your memories.

Send flowers to the Ihnat family.