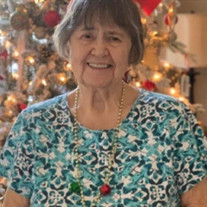 Mrs. Grace Louise Ross Stumpf, daughter of the late Frank Horice KaRoss and Mary Louise Plewinski, was born on June 19th, 1932 in Chicago, Illinois. Grace was a Renaissance woman mastering a variety of trades in the service industry, medical assistance, and product sample distributor. She remained active throughout her retirement serving as a coordinator the PAL’S organization, People Adjusting to Limited Sight. She was married to the late Bob Ross of Chicago in September of 1950 and together they had five children. She was remarried to the late John Stumpf on April 20, 1974. Grace was a mother, a grandmother, great-grandmother, and a great-great grandmother. Serving her family was her most cherished role. She was active in the lives of her children and always “adopted” family friends. She was one of the most generous people and was beloved by all who met her. She spent her life living out the Christian principle of loving thy neighbor. Her door was always open, and you could not walk by her home without an invitation in to join her at her table. Her faith in God was paramount in her life. She found great comfort in attending mass and the community of her parish. She is survived by her five children Robert Ross and Denise Ross, Raffaella Miller and Wayne Miller, Michael Ross and Linda Ross, Mary and Robert Rio and Barbara and William Ritter. She had fifteen grandchildren, forty-one great-children, and two great-great grandchildren. She was an only child and always wanted a large family. She achieved this goal and never forgot to call on a birthday. She was a member of St. Elizabeth Seton Catholic Church, a Mass will be held in her honor on Saturday, May 1st at 11:00 am. 4600 Belle Terre Parkway, Palm Coast, Florida 32164. In lieu of flowers, please send any donations to her daughter, Mary Rio, at 34 Sleepy Hollow Trail, Palm Coast, Florida 32164. Her wish was for cremation and to return the sea with her father and her late husband, John Stumpf, in Marathon, Florida.

The family of Grace L. Stumpf created this Life Tributes page to make it easy to share your memories.

Send flowers to the Stumpf family.