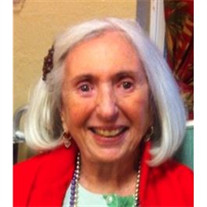 Harriet Sue Gottlieb of Ormond Beach, FL passed away peacefully on October 13, 2015, surrounded by her loving family at the age of 86.She was born on February 14, 1929 in the Bronx, NY to the late Simon and Mollie Pollack. She married Ernest Gottlieb on June 19, 1949 in New York City, and had one son, Glenn Mark Gottlieb. Harriet graduated from Hunter College and then went on to earn her Master’s from Adelphi University. Harriet worked most of her life as an elementary school teacher in the Plainview/Old Bethpage School District on Long Island, NY until her retirement in 1990. She was loved by her students, some of who expressed that they remember her as their favorite teacher when they became adults. One of Harriet’s favorite activities was to travel around the world, sometimes with her husband and son and other times with friends. She and Ernest especially enjoyed taking their grandson on trips throughout the US and Europe when he was a child. Harriet’s other hobbies included cooking, embroidery, golf, and playing mah-jongg. In 1994, Harriet and Ernest relocated from Long Island to Ormond Beach to be closer to their son and his family. In addition to her parents, she is preceded in death by her husband, Ernest in 2012. She leaves behind her son, Glenn Gottlieb and wife Amy of Ormond Beach, FL a grandson, Adam Gottlieb and wife Katie of Houston, TX and a beautiful great granddaughter, Eliana Gottlieb. Harriet will be remembered by her family as a loving wife, mother, grandmother, and great-grandmother. She will also be remembered by her friends as compassionate, fun, and someone who always cared for others. She was a strong believer in supporting charitable causes locally and nationally, especially those based on the Jewish principal that it is everyone’s obligation to help others and improve the world. She was active in, and volunteered for leadership roles in local chapters of several Jewish organizations including Past President of B'nai B'rith and was a lifelong member of Hadassah. In lieu of flowers, memorial donations may be made to the Jewish Federation Jerry Doliner Food Bank, 470 Andalusia Ave., Ormond Beach, FL. 32174. Arrangements are under the care of Heritage Funeral & Cremation Service.

Harriet Sue Gottlieb of Ormond Beach, FL passed away peacefully on October 13, 2015, surrounded by her loving family at the age of 86.She was born on February 14, 1929 in the Bronx, NY to the late Simon and Mollie Pollack. She married Ernest... View Obituary & Service Information

The family of Harriet Sue Gottlieb created this Life Tributes page to make it easy to share your memories.

Send flowers to the Gottlieb family.