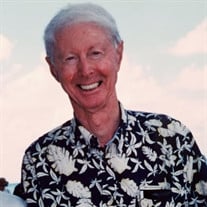 Harry "Gil" Gildred, 95, passed away peacefully with his family by his side and went home to be with the Lord Jesus Christ on April 8, 2017. He was born in Belmont, MA; graduated from Boston University; and settled in River Vale, New Jersey when working at 3M. He devoted his life to his wife, Clarice (Hoffman) Gildred who is from Hibbing, MN; they were blessed with 63 wonderful years of marriage. They raised 4 daughters, Janet Gildred, Nancy March (John), Harriet Hinson (Michael), and DeAnne Moritz (Robert), and enjoying being a part of his Granddaughter's life, Caitlin C. March. His life was full and included many volunteer hours, including but not limited to planning bicycle trips for his Boston University club members, initiating the first safe bicycle routes within both River Vale, NJ and Flagler County, FL, and single handedly proposed and was awarded a $3.5 million dollar grant for Flagler County's first border to border bikeway/pedestrian path known as the original A1A Bikeway. Harry was honored by both River Vale who presented him with a Key to The City and by Flagler County's Board of County Commissioners by Proclamation (on February 20, 2017) for his work and commitment to biking in Flagler County. He also served as Chairman of the River Vale Public Library Board and President of the Board of St. Mark's Preschool (Palm Coast, FL). He loved spending time with his family and friends, exercising to include walking with his wife/family on the beach, bicycling, and golfing. When his daughters were elementary school age he had tirelessly begun batting and throwing a softball which they just loved. However, the town didn't offer a girls league, so helping his eldest daughter with her first dream of playing on a team, he guided her to begin the first girls softball league in River Vale, NJ, with the required amount of girls' signatures on the petition. With that, he also co-coached the softball teams. Meanwhile, his career with 3M was one which he thoroughly enjoyed, always citing the importance of "one's psychic income" in the work you do. Friends know that he always talked of his love for cruising, and especially those freighter trips that would last well beyond the scheduled return date. Panama Canal cruises were always his favorite trips. He loved reading, thus his contribution of time with the town Library Board. He and Clarice retired to Palm Coast, FL in the late 1980s. A Celebration of Life will take place on Saturday, 4/22/2017, 3:30-5:30 PM, at Christ Lutheran Church, 2323 N State Street, #112, Bunnell, FL 32110. A burial will take place at the Cape Canaveral National Cemetery. The Gildred family hopes you will visit the “Tributes” tab at www.heritageflagler.com to review and add your own remembrances.

Harry "Gil" Gildred, 95, passed away peacefully with his family by his side and went home to be with the Lord Jesus Christ on April 8, 2017. He was born in Belmont, MA; graduated from Boston University; and settled in River Vale, New Jersey... View Obituary & Service Information

The family of Harry J. Gildred Jr. created this Life Tributes page to make it easy to share your memories.

Send flowers to the Gildred family.