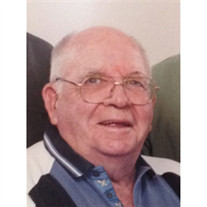 James Harvey Wallace James Harvey Wallace, age 93 of Daytona Beach, FL and Scarborough, ME died peacefully on December 4, 2013 in Port Orange, FL surrounded by family.  Harvey was born to the late Clifford Wallace and Lucinda (Pease) Wallace on September 4, 1920 in Hollis, ME. Harvey graduated from Buxton High School, ME and served in the United States Army during World War II.  In 1947, Harvey married Florence (Michael) Wallace and moved to Lowell, MA where they raised their son James.  The family moved to Greenfield, MA in 1964.  Florence died in 1987.  He  retired from the Boston and Maine Railroad in 1980 after a 33-year career.  He was a 32nd degree Mason in the Buxton Lodge #115 AF & AM, then later became a member of the Kora Shrine in Lewiston, ME. Harvey lived an active and full life and he was grateful for the many friends he made over the years.  He golfed and bowled into his 80s.  He was an excellent card player and loved playing poker, gin, cribbage and canasta.  He especially enjoyed reading John Grisham novels, and was a lifetime fan of the Patriots, Red Sox and Celtics.  He was always quick to lend a hand to a neighbor, family member or friend embarking on a home improvement project and he enjoyed ‘puttering’ in his workshop.  However, most of all, Harvey loved his family Harvey leaves behind his wife Dolores (Vespi) Wallace, his son James Wallace and daughter-in-law Patricia Rissmeyer of Boston, MA, his granddaughter Jennifer Wallace of Northampton MA, his grandson Joshua Wallace and Josh’s wife Bethany of Amherst, MA, his three great- grandchildren Madden, Holden and Laurel and many close family members in Maine. A Memorial Service will be held at 11:00 am Saturday, December 14, 2013 at the First Congregational Church of Buxton/Tory Hill Meeting House, Buxton, ME. Memorial contributions may be sent to the South Buxton Cemetery, 1187 River Road, Buxton, ME, 04093, the Shriner’s Hospital, 51 Blossom St., Boston, MA, 02114, or Halifax Health Hospice of Volusia/Flagler, 3800 Woodbriar Trail, Port Orange, FL, 32129. All arrangements are under the care of Heritage Funeral & Cremation Service, Port Orange, FL.

The family of James Harvey Wallace created this Life Tributes page to make it easy to share your memories.

Send flowers to the Wallace family.