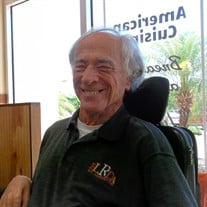 James Theodore Richardson, Jr., was born July 12, 1946, in Donalsonville, GA, the second of three children born to James T. Richardson Sr. and Dorothy Louise Cofty. His dad was career Air Force. They lived in many places, including Japan, France, Germany, Washington State, Texas, and Georgia before finally settling in Fort Walton Beach, FL. He was married to his college sweetheart Cindy Twing in 1970, and in 1976, their son James Christopher Richardson was born. After graduating from Florida State University with a Masters in Social Work, James began his 27-year career with the Federal Government, where he worked at Ft. Belvoir, VA; Eglin AFB, FL; the Pentagon in Washington, DC; the Environ¬mental Protection Agency in Crystal City, VA; and lastly the Office of Naval Research in Arlington, VA, until his retirement in 2001. James is survived by his wife Cindy; his son James Christopher; two grandsons, Ian Storm Richardson and Ronan Kane Richardson of Rochester, NY; his sister Linda Kay Bosarge of Brunswick, GA; his brother H. Wayne Richardson of Sumter, SC; and many cousins, nieces, and nephews. He also leaves behind three little shelter Labs. In 2003, James and Cindy moved to Palm Coast, FL, where he enjoyed reading, collecting art and spending time with the family dogs. He was a member of Parkview Baptist Church. A memorial service will be held on Friday, September 9, at 12:00 noon. In lieu of flowers, donations can be made to the Flagler County Humane Society.

The family of James T. Richardson Jr. created this Life Tributes page to make it easy to share your memories.

Send flowers to the Richardson family.