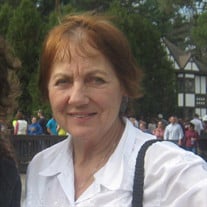 Janet A Gilbert, 80, passed away on Monday, December 28, 2020 at Palm Coast Advent Hospital in Palm Coast, Florida after a courageous battle with cancer. She was born in Erie, Pennsylvania on August 29, 1940, daughter of the late Michael C Kopes and Anna Vladimiroff Kopes. Janet attended St. Patricks School for 8 yrs and graduated from East High School in 1958 and went on to work at Electron Research, Inc in Erie. After raising her children, she then worked at St. Vincent's Surgery Center and UPMC Hamot for 27 years, retiring in 2013. Janet believed, had faith and loved the Lord. She was raised Catholic, she attended St Patricks Church since childhood and over the years while living in Erie. She often would travel to Florida to stay with her daughters and go back and forth to her home in Erie, PA. She recently became a member of the Ladies Auxiliary Post 113 (Palm Coast) as she supported our veterans. Family was the most important to Janet as she loved to spend time with her four daughters, grandkids, and great-grandkids. She loved to travel and teach her grandkids to cook and bake. She liked going to the beach in Florida, going out to eat and occasional casino trips. She was a wonderful mother, grandmother and friend. She liked to give advice and wanted the best for her family. She was a selfless, caring, generous person who threw herself into caring for anyone who needed help. There was no person above or below her generosity and compassion. In addition to her parents, Janet was preceded in death by her husband, Vance Raun, married 10 years. And William Gilbert after many years of marriage. A sister, Rita Caton; two brothers, Jerome and Michael Kopes Jr, and her beloved dog "Lucy" who was her companion for many years. Janet is survived by a sister, Phyllis Zmudzinski (Walter) of Lynchburg, VA. Four daughters, Tracy M Hess (Robert) of Palm Coast, FL, Patricia Ann DiLuzio (Thomas) of Erie, PA, Kris Beckett (Bill) of Palm Coast, FL and Jenny June Pierce of New Port Richey, FL Nine grandchildren, Matthew Raun (Shayna), Ashley Roberts (Bryan), April Kocher, Katelyn Raun (Nate), Ryan Raun, Kelly Wagner (Seth), Alex Duda, Angela Meucci (Bogdan), Jacob Holmes. Seven great-grandchildren Alexis, Olivia, Hudson, Elliana, Dawson, Jensen and Marit She also is survived by a sister-n-law, Janet Lawrence of Erie, PA, and close friends, Norma Larkin, Carolyn Bush and Yvonne Hastings of Erie. Many cousins, nieces, nephews & friends A Private Memorial Service will be held by the Family Saturday 10-12 with service starting at noon

Janet A Gilbert, 80, passed away on Monday, December 28, 2020 at Palm Coast Advent Hospital in Palm Coast, Florida after a courageous battle with cancer. She was born in Erie, Pennsylvania on August 29, 1940, daughter of the late Michael C Kopes... View Obituary & Service Information

The family of Janet A Gilbert created this Life Tributes page to make it easy to share your memories.

Send flowers to the Gilbert family.