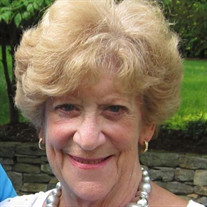 Janet Louise Blum Johnson, 86, of Bear Rocks, Pennsylvania, died peacefully March 26, 2021 at her Palm Coast, Florida home. Janet was born May 3rd, 1934 in Pittsburgh, Pennsylvania to the late Eleanor Dreyfus Goodman and the late Jacques Blum. She is survived by her loving husband, Gene Johnson, and her children Debra Fisher (David), Susan Aronson Nussbaum (Steven), Harvey Aronson (Melissa), James Aronson (Jordan) and Gene Johnson III (Andrea) and her grandchildren, Susie Pitell (Justin), Tracy Gorman (Sean), Elle Nussbaum (Scott), Jacob Nussbaum, Michael Nussbaum, Jeremy Aronson, Jonah Aronson and Geno A. Johnson, and her great grandchildren, Autumn Pitell, Maeve Gorman, Lochlann Gorman and Noah Ross. She was preceded in death by her treasured sister and brother, Constance Marstine (Sheldon) and Jack Blum, Jr (Annette) and is survived by nieces Janet Marstine Polishook (Mark) and Cathy Blum. She is survived by her sister-in-law, Patty Johnson Orner (Rich) and nieces, Meridyth and Rachel. A 1952 graduate of Mt. Vernon Seminary, Janet was a top athlete who exceled in tennis and golf, where she competed in amateur leagues. She was also a long-standing member of the Laurel Highlands Knitting Guild of Ligonier, Pennsylvania. Later on, she became an aerobics instructor with a great following, who some say, gave Jane Fonda a run-for-her-money. Janet adored the outdoors. She loved to swim and enjoyed long walks on the beach and sometimes with her beloved dogs. She and Gene were avid campers and hiked almost all of the National Parks in the United States. They were so much fun to be around, that the people who met them along the way often became lifelong friends. Let’s not forget the Steelers, the Pirates, and the Penguins. Janet might have retired to Florida, but she took her Pittsburgh teams with her. She was a huge fan and she let everyone know it. She even had three college teams in the mix: “Hail to Pitt”, the Penn State Nittany Lions and the University of Michigan Wolverines. It’s worth noting that Janet also became a fan of amateur wrestling at all levels and worked at various tournaments with Gene. Janet was a member of Trinity Presbyterian Church of Palm Coast, Florida, but previously served as an ordained Deacon, along with Gene at Mt. Pleasant Reunion Presbyterian Church in Pennsylvania. Always the first one to break out in infectious laughter, Janet was joyous, gentle and a compassionate, outstanding human being. She will live in the hearts of her children, her grandchildren, her great grandchildren, her many dear friends and in her cherished husband, Gene, forever. Funeral arrangements will be private and will be arranged by Heritage Funeral & Cremation Service of Bunnell, Florida. In lieu of flowers, please consider giving to the charity of your choice.

The family of Janet L Johnson created this Life Tributes page to make it easy to share your memories.

Send flowers to the Johnson family.