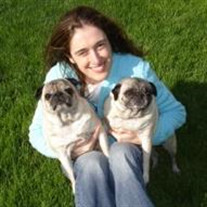 Jennifer Lynn Wright, 46, of Palm Coast, Florida passed away on March 21, 2021. Truly beautiful inside and out, Jennifer devoted her life to her loving husband, Michael Wright, and her pets who she called her furry gang of misfits. She spoiled and loved Bubba, Thurman, Zoe, Holly, Coley, Jessie, Franklin, Lilly, and Abby with all her heart. Born on October 15, 1974, Jennifer grew up in Meriden and Wallingford, Connecticut. She attended Holy Trinity School and graduated from Lyman Hall High School in Wallingford. Jennifer was a writer and a published author who wrote a series of short stories about her and Michael’s first pug, Zoe, who had recently passed. Jennifer wrote these short stories about the life of Zoe the pug as a way to always remember the beautiful and fun times she and Mike shared with her. Eventually, these short stories, created out of love and memory, were turned into a book, THE GRUMBLY PUG, which was published in 2017 and listed in the Library of Congress. This book was the start of an amazing and loving community that grew on Facebook under Jen’s professional name, Jennifer Niland Wright. Over the past five years, some 60,000 people would follow Jennifer, many joining her on her weekly Facebook Live posts. Jennifer and her pug-loving community would talk about all things dogs. Jennifer so loved this community created out of love for the furry gang that was family for her and Michael. Prior to becoming a writer, Jennifer worked many years in the insurance industry at Aetna in Hartford, where she formed amazing friendships with her Aetna family. Most recently, Jennifer worked as a sales associate and then manager at J. Crew Factory Outlet in Daytona Beach, Florida where she loved meeting new people and making friends. Jennifer originally took the job with J. Crew because she wanted to socialize more, and this grew into some great friendships. Jennifer was so proud that she had been with the Daytona Beach store since it opened in 2016, and she was coming up on her five-year anniversary. Jennifer also enjoyed running and had recently set a goal for herself to run a half marathon by the end of the year. Jennifer accomplished a few half marathons in 2010 and 2011 including the Hartford Half Marathon and the New York City Half Marathon. Jennifer had just started running again recently and was so looking forward to accomplishing this goal. Jennifer was also a member of the Palm Coast United Methodist Church where she taught Sunday School. She loved her church community and adored all of the amazing children she was able to teach there. Jennifer’s involvement with her church was so very important to her and she felt at home when she became a member of PCUMC. She loved and respected Pastor Kevin James and Reverend Theresa Waters, always connecting to Pastor Kevin’s services and his funny sense of humor. That may be because Jennifer had her own unique, witty, and corny sense of humor. She found a way to slip in silly jokes and puns at just the right moment, making so many in her presence smile and laugh. She could also break out in a 90’s rap song at a moment’s notice, and brilliantly rap every single word. Speaking of “wrapping,” Jennifer had a knack for finding or creating the most thoughtful and meaningful gifts for those she loved. Jennifer had a desire to always be learning something new. Jennifer would take classes and was an avid reader, eager for new and meaningful discoveries. When she and Mike first moved to Florida, she took classes to become a real estate agent and got her license. Although she didn’t practice real estate, she just loved to be in class in order to continually grow. Jennifer had recently received a letter that she had been called for jury duty and she was thrilled because that would give her an opportunity to witness the criminal justice system in action. Michael joked with her that she is probably the only person he ever knew who was actually excited to get called for jury duty. Jennifer is survived by her loving, caring, loyal, and devoted husband, Michael Wright. They were looking forward to celebrating their 23rd wedding anniversary on September 26, 2021. Jennifer is also survived by her mother and stepfather, Tracey and Jim Lobb of Ocean Isle Beach, North Carolina; her father and stepmother, Robert and Bernadette Niland of Portland, Connecticut; her sister and brother-in-law, Lisa (Lobb) and Steve Secundo, and her beloved niece, Margo Mary Secundo of Westport, Connecticut; her grandfather, Clayton Nettleton of Fort Pierce, Florida; her aunts, Patti (Ed) Gwara, Joy (Dennis) McNeil and Pamela Doll, and her uncles Scott (Kris) Nettleton and Jim (Lucy) Niland. Jennifer was predeceased by her maternal grandmother, Elaine Nettleton and her paternal grandparents, Robert and Jean Niland. Jennifer is also survived by her large family of in-laws including parents-in-law Thomas and Gail Godbout of Palm Coast, Florida and Cheshire, Connecticut and Richard and Joann Wright of Ormond Beach, Florida. Sisters and brothers-in-law include Stacey (Wright) and EJ Roberts, Wendy (Wright) and Stephen Richards, Richard and Fran Wright, Joshua Wright and fiance Jessica John, Thomas and Lindsley Godbout, and Joseph Godbout and partner Robbin Ricci. Jennifer’s beloved nieces and nephews include Kathryn Roberts, William Roberts, Kimberly Richards, Bethany Richards, Jack Richards, Richard Wright, Joseph Wright, Currey Godbout, Cooper Godbout, and Casey Godbout. Arrangements have been entrusted to Heritage Funeral and Cremation Service in Palm Coast, FL. A Celebration of Life in honor of Jennifer will be held on Saturday, April 10, 2021 at 1:00 PM at Palm Coast United Methodist Church, 5200 Belle Terre Pkwy, Palm Coast, FL 32137. In lieu of flowers, Jennifer would have wanted and very much appreciated any donations to be sent to The Pug Rescue of Florida. We have created a link which will direct you to this fundraiser: https://www.facebook.com/donate/810307919604844/

Jennifer Lynn Wright, 46, of Palm Coast, Florida passed away on March 21, 2021. Truly beautiful inside and out, Jennifer devoted her life to her loving husband, Michael Wright, and her pets who she called her furry gang of misfits. She spoiled... View Obituary & Service Information

The family of Jennifer Lynn Wright created this Life Tributes page to make it easy to share your memories.

Send flowers to the Wright family.