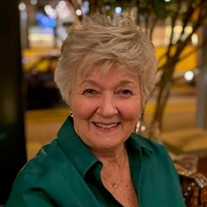 Jeri Sellers Hannula passed away on Tuesday October 26 under the care of the Stuart Meyer Hospice House, Palm Coast, Florida, following a hard fought battle against pancreatic cancer. Jeri was born on August 5th, 1946, the daughter of the late Ruby and Jewell Sellers in Greenville, South Carolina. She is the wife of John Hannula, mother to Todd (Dawn) Reid (Edit), and Ian (Joe) and Tonia Bryant (Gary). She is the grandmother to Kieran, Zeke, and Sophie Hannula, Garyn Bryant, Kayla Bryant Leonard (Brandon) and great grandmother to Oliver Leonard. In addition Jeri is survived by numerous friends and a family of choice. In addition to her parents, she was preceded in death by her brother Kenneth. Jeri graduated from Carolina High School in 1964. After several years, she moved to Atlanta and began her employment with Gordon Bailey and Associates. Along the way, she met and married the love of her life, John. Upon retiring from Gordon Bailey, she began a second career at GDS and Associates. After a second retirement in 2018, she and John moved to Daytona Beach Shores, Florida. Jeri was a devoted Christian. Having grown up in the Tremont Church of God in Greenville, she and John became active and devoted members of Saint Mark United Methodist Church in Atlanta. Her father Jewell was a talented gospel singer and Jeri throughout her life had a love for Christian music. As one friend noted, Jeri had a generous spirit exemplified by the times she gave to others of her time and resources, was full of joy and laughter, and possessed fierceness and strength. She always stood up and supported that which was right and good. It has been said that there are those who bring light that is so great into the world that even after they’re gone, the light remains. Jeri’s light and influence will definitely remain. A memorial service will be held at Saint Mark United Church, 781 Peachtree St, at 1:00 p.m. on Saturday November 6. Visitation in the parlor will begin at noon. Free parking will be available at the AT&T Parking Facility whose entrance is at the corner of 4th and West Peachtree streets. COVID protocols will be followed. Masks will be required. The family would like to thank the staff of the Stuart Meyer Hospice House for their loving care and support. In lieu of flowers , it was Jeri’s wish that donations be made to the Saint Mark United Methodist Church’s Children’s Ministry.

Jeri Sellers Hannula passed away on Tuesday October 26 under the care of the Stuart Meyer Hospice House, Palm Coast, Florida, following a hard fought battle against pancreatic cancer. Jeri was born on August 5th, 1946, the daughter of the... View Obituary & Service Information

The family of Jeri S Hannula created this Life Tributes page to make it easy to share your memories.

Jeri Sellers Hannula passed away on Tuesday October 26 under...

Send flowers to the Hannula family.