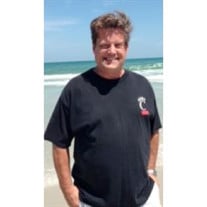 Jerry D. Robinson Jerry D. Robinson, 54, of Palm Coast FL, was born in Akron, OH on September 1, 1960 and passed away October 29, 2014 after a courageous battle with metastatic melanoma, entering his eternal home, healed and at peace. Jerry was a high energy, fun loving, generous and positive spirit. He enjoyed going to flea markets, pawn shops, the beach, cars, flying radio controlled helicopters and being “PaPa” to his grandchildren. Jerry was Co-Owner of New Horizon RV San Mateo, FL. He is preceded in death by his parents, Larry and Millie Jean Robinson nee Gilley and his son, Adam Buzaki. He will be forever missed by his wife, Monica, son, Jason Robinson (Marc Yeager), Daughters, Nell  Keister (Richard), Alicia Garrett (Patrick), and precious Joy Bonghanoy, Philippines. He also leaves behind his precious grandchildren, Travis, Nicole, Xander, Ryan, Landon and Kyleigh. Brothers, Doug Robinson (Kim), Terry Robinson (Linda), Reed and David Robinson (Christin). Good friend, who was like a brother, Ed Snyder, many cherished Aunts, Uncles, Cousins, Nieces, Nephews and Friends. A Memorial Service to Celebrate Jerry’s life will be held at 11:00 am on Wednesday, November 19, 2014, from the Parkview Baptist Church, 5434 Belle Terre Pkwy., Palm Coast, FL 32137. All are welcome to attend. Memorials may be made to a Give Forward Fund set up by his children. http://gfwd.at/Z5TKKU…..willing rather to be absent from the body, and to be present with the Lord. - 2 Corinthians 5:8 Arrangements are under the care of Heritage Funeral & Cremation Service, Flagler County, FL.

The family of Jerry D. Robinson created this Life Tributes page to make it easy to share your memories.

Send flowers to the Robinson family.