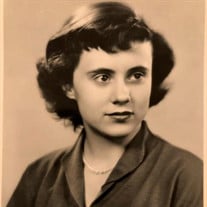 JoAnn Boyd Scott passed away on February 11, 2019 at Loving Angels Assisted Living Facility in Palm Coast, Florida. JoAnn was born on July 24, 1935 in Sheridan, Wyoming to Johnston P. (Sonny) and Ina Mae Boyd. She lived on a Montana cattle ranch and rode her horse to grade school. She participated in cattle round-ups and other ranch duties as well as learning from Ina Mae how to cook large quantities of food for hungry ranch hands. JoAnn attended Sheridan High School and graduated in 1953 whereupon she went to college in LaCrosse, Wisconsin where she was the first junior to become homecoming queen. She graduated in 1957 with a physical education degree. While at LaCrosse, JoAnn met and became engaged to fellow student Richard L. Wagner. They were married in Sheridan, Wyoming in 1956. Later, they lived in various parts of Wisconsin while they both taught and Dick coached. They moved to Whitewater, Wisconsin in 1968 where she taught modern dance and was the college women’s track coach. She was the first woman with tenure at UW-Whitewater. JoAnn studied for and received a biology teaching degree and the family subsequently moved to Sarasota, Florida, where JoAnn taught at an alternative high school for kids who had dropped out of school. She excelled with these students and provided hands-on science labs as well as numerous field trips for the kids to do such things as swimming with dolphins and exploring the west. JoAnn was divorced in 1980 and eventually met and married her soulmate, Lawrence A. Scott (Scotty) in 1984. She continued teaching for several more years. They spent many summers together travelling the country, visiting relatives and having adventures. JoAnn loved life and was upbeat and fun to be around. She always made visitors feel at home and was a wonderful cook. JoAnn and Scotty relocated to Asheville, NC in 1999 and were joined by her mother, Ina Mae Boyd, for several years. Finally retired by now, they hosted family and friends and continued to take trips out west in the summers. JoAnn volunteered at the library and geneology society. After her mother relocated to Billings, Montana, JoAnn and Scotty moved to Palm Coast, Florida. JoAnn is survived by her children Brad Lee Wagner, Robert William Wagner, Laurie Wagner Powell and Lindy Kindell; grandchildren Jesse Jamison Wagner, Justin Lee Wagner, Kara Simone Powell and great-grandchild Ember Mae Wagner. She is also survived by her brothers Phillips Lee Boyd (aka Joe), Marcus Johnston Boyd and many dear cousins: Marion Mann, Frank Mann, Paul Allen Gill and Lily Ann (Gill) Browning, Letha McGovern Pilkerton, Tom and Marcus O’Bryon and Barbara Boyd. JoAnn was preceded in death by her parents, sister Judy Boyd Lervick, and cousin Karen (Mann) Waters. JoAnn developed vascular dementia later in life and was cared for by her husband, Scotty. She then joined the Assisted Living Facility of Loving Angels in 2017 and she and her family greatly appreciate the loving kindness and care that were provided. The family also thanks VITAS Hospice team for its wonderful support through this very trying time. Services will be provided by Heritage Funerals and Cremations of Bunnell, Florida. A graveside service will be held at 11:30 on Saturday at Dunnellon Memorial Gardens in Dunnellon, Florida.

The family of JoAnn Scott created this Life Tributes page to make it easy to share your memories.

Send flowers to the Scott family.