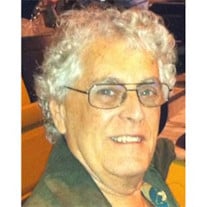 John Cameron "Jack" McDonald John Cameron "Jack" McDonald of Daytona Beach Shores, FL went home to be with his Lord on October 24th, 2013 at age 76. His loved ones, family, and friends now know that it is possible to both celebrate and mourn the passing of this exceptional man. Jack was born and educated in Canada. He served thirteen years in the Royal Canadian Navy before emigrating with his family to the United States in 1976. He began to establish and build McDonald Insurance Agency shortly thereafter. For many years he and Ruth traveled the world as avid scuba divers and underwater photographers. However, his true love and passion has always been teaching God's Word, no matter where he lived, Canada, Mexico, or here in the Daytona area. Out of those small groups over the years, not one but two new churches were established, and untold numbers of lives were forever changed. In recent years, he and Ruth co-authored the book "Under the Cloud" and founded Under the Cloud Ministries.  At the same time he began a weekly webcast, www.uniquebiblestudyresources.com, that listeners from all over the world continue to follow. Jack is survived by his wife of 55 years, Ruth McDonald of Daytona Beach Shores, FL, two daughters, Heather McDonald of Washington, DC, and Heidi McDonald of Flagler Beach, FL, and two granddaughters, Louise Minton of Lake Worth, FL and Marilyn Minton of New York City, NY. He also leaves behind his brother Dan McDonald and wife Shirley of Kingston, ON.

The family of John "Jack" McDonald created this Life Tributes page to make it easy to share your memories.

Send flowers to the McDonald family.