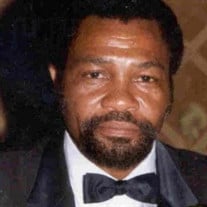 John Thomas Ferguson, 86, of Palm Coast, Florida passed away on June 3, 2021. He was born on March 5, 1935 in Barnesville, Georgia. John later relocated to Cleveland, Ohio with his family. He graduated from Glenville High School while excelling in football. After graduation he enlisted in the United States Air Force. John was honorably discharged after serving two tours of active duty with a rank of Specialist E4. He was also a Mason and held a career as an Electrician. John enjoyed watching CNN and critiquing the outfits of the female newscasters, traveling to Greece to see his son/grandson, daily discussions about life, women/men issues with his daughter Debra, visits from his grandchildren, drinking Taylor Port wine, eating a good home cooked meal while closing his eyes to saver each bite, reading the Bible and interpreting it in his way, and telling everyone his favorite statements of, “That’s life, that’s Walgreens” or “It’s not hard, you can do it; it’s EASY.” John Thomas Ferguson was a beautiful and witty soul who loved life and believed in living each day in the moment. He was a loving brother, father, husband and friend who will be missed deeply. "Daddy, you have changed clothes (as he always stated) and you are at rest; still living in the moment". John was preceded in death by his father Estes, mother Mattie Lizzie, siblings Jay, Virginia, Ethel, Joe, Fred, Lois, Julius Jr., Odessa, Troy, spouse Carol Bailey - Ferguson. John is survived by his two daughters Debra Johnson and Lorene (Troy) Ferguson, and one son Chris Ferguson. Grandchildren Carlos Gonzalez, Brittney Johnson, Desiree Driver, Jessica Driver, Jason Ferguson, and John Jr., two sisters-in-law Vivian Ferguson and Evelyn Ferguson, one brother-in-law, Howard King, his special lady Wileta D. Davis and an array of nieces, nephews and close friends.

John Thomas Ferguson, 86, of Palm Coast, Florida passed away on June 3, 2021. He was born on March 5, 1935 in Barnesville, Georgia. John later relocated to Cleveland, Ohio with his family. He graduated from Glenville High School while excelling... View Obituary & Service Information

The family of John Thomas Ferguson created this Life Tributes page to make it easy to share your memories.

Send flowers to the Ferguson family.