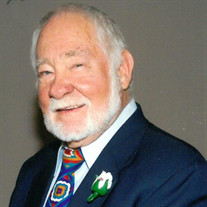 John “Johnny” Morrison, 85 peacefully passed away on March 15, 2022 at Halifax Hospital in Daytona Beach, Florida. Johnny was born January 27, 1937 in Gainesville, GA to the late Harvey and Emma Lee Morrison. He was predeceased by granddaughter Emma Lee Jane Fuller, great granddaughter Trinity Fuller and wife of thirty-five years Mary Taylor. He is survived by his wife of eleven years Glenda McMurry, son Jeremy Todd Morrison (Sherry), daughter Sharon Fuller (Charles) all of Gainesville, GA. He is also survived by his grandchildren Randall Cohn Fuller, Matthew Fuller, Jordan Morrison, and Justin Morrison. Great grandchildren Adrian Fuller, Aden Fuller, Matthew Fuller, Cohn Fuller, and Carter Perry. Johnny attended high school in Gainesville, GA before proudly serving in the US Air Force. He was an avid Nascar fan, especially Chase Elliot. Johnny enjoyed camping, racing cars, motorcycles and anything that had wheels and a motor. Johnny also loved working on cars as a former auto mechanic and had a big heart for animals. Johnny touched the lives of many and the family is grateful for the many testimonies and tributes shared at this time. The family invites all friends to join them as they celebrate his life. A Celebration of His Life will be held at 2pm on Saturday, April 2nd at Westside Baptist Church, 3559 Canal Avenue Bunnell, FL 32110 where he was long time member and served the Lord. "Knowing I did right with my time on the earth, was forgiven when I fell short, my race is finished and I've entered into His presence." Arrangements lovingly entrusted to Heritage Funeral and Cremation Service.

The family of John C. Morrison created this Life Tributes page to make it easy to share your memories.

Send flowers to the Morrison family.