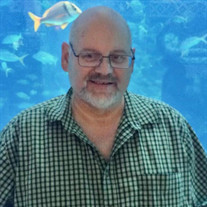 John Wayne Smith, 70, of Palm Coast, FL died unexpectedly on February 17, 2022. He was born on November 12, 1951 in Wilmington, NC to William and Lillian (nee Congleton) Smith. John was a fervent learner, leading him to teach American Sign Language once he completed his schooling. He attended the North Carolina School for the Deaf K-12 in Morganton NC, graduating in the Class of 1970. He obtained a Bachelor of Arts from Gallaudet University in Washington, D.C. in the Class of 1975. John further his studies across the country at Landmark College, St. Mary’s University, Western Maryland College, and the University of Minnesota. He also attended the school of International Training and St. Paul Technical College. John had a tremendous impact on many lives, teaching ASL for the Portland, Maine public school system. He was very proud to be a co-founder of ASL chapter in the State of Maine. Before retiring, he worked for the department of Parks and Recreation in Minneapolis, Minnesota. John was a person everyone should aspire to be. He was a gift to his family and his family of friends. He was known for his bright mind and beaming smile. John was a deep thinker- he always was looking at life and digging deeper to examine what was inside. He wanted to know how people functioned and what they thought. His conversations displayed his wit, sought their humor and general nature that fueled them. John genuinely liked people- well enough to disagree with them and laugh about their differences. Laughter was his most prominent feature. If laughter were an exercise, John would have been an Olympian, perhaps the heavy weight champion at that! Thinking about John makes our entire family smile. What a legacy to leave! What a gift! John was a loving, caring and generous father, brother, companion and friend. He will be greatly missed across the country! John is survived by his son Benjamin Schroeder Smith; brother Bill Smith and sisters Nancy (Ed Brittain) Smith and Elizabeth (Robert) Fuldner; as well as his significant other Pamela McMahon of Palm Coast Florida and her son Romeo Lentini, and daughters Camela (Matt) Klusza, and Shari McMahon. There were also many grandchildren, nieces and nephews to cherish. He is also survived by grandchildren Bambi and Xyla Lentini, Leia and Lance Klusza, and Aria Belle McMahon; nephews William [IV] and James Brown, and nieces Sonja and Jessica Brittain; as well as grand nephews Marley, Tristian, and Clayton Brown, and Trenton Stone Kidd; and grand nieces Adeline and Caroline Brown, and Lilliana and Rosalina Brittain. John was proceeded in death by his parents, William and Lillian Smith, and his youngest son Philip Schroeder Smith. Psalms 23:1-3 is particularly meaningful with John’s passing: The lord is my Shepherd I shall not want. He maketh me lie down in green pastures: he He leadeth me beside the still waters He restoreth my soul, he leadeth me in the paths of righteous for his name sake. A Celebration of Life is being held on Thursday February 24 ,2022 at 3:00 pm in the beautiful Washington Oaks State Park located at 6400 North Oceanshore Blvd., Palm Coast, FL 32137 It is the covered picnic area shelter #79023 and is close to the playground. NOTE: Parking is $5 cash, per car ( Up to 8 persons, per vehicle ) In lieu of flowers, our family encourages you to make a donation in John's honor to Gallaudet University. You can donate directly online at https://www.gallaudet.edu/office-of-development/one-time-donation/ or contact Janice Johnson (202) 250-2943 for videophone, (202) 651-5410 for voice, or e-mail [email protected] for more information. Heritage Funeral and Cremation Service of Bunnell, FL is assisting the family. www.HeritageFlagler.com

The family of John Wayne Smith created this Life Tributes page to make it easy to share your memories.