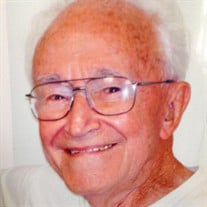 Joseph M. Kenworthy Jr., 100, passed away at his home in Ormond Beach on June 29, 2016. He was born on December 7, 1915, and raised in Philadelphia, PA. He graduated from the University of Pennsylvania with a degree in Mechanical Engineering. He was a member of the university tennis team. On March 28, 1942, he married the love of his life, Henrietta Paige Baile in Alexandria, VA. He served in the United States Army as an officer in the Quarter Master Corp during World War II. His professional career included working for Arco Oil, General Dynamics, the U.S. Postal Service, and the Federal Small Business Administration. He retired in 1980 from the Veterans Administration in Washington, D.C. Joe was a self-taught professional electrical engineer. He participated in and directed duplicate bridge tournaments, enjoyed photography and built a dark room in his home in Pennsylvania. He loved playing ping pong and pool; and in retirement he built beautiful custom furniture, was an accomplished upholsterer, taught himself to play the piano, and enjoyed coin and stamp collecting. He was preceded in death by his parents, Dr. J. Miller Kenworthy and Estelle Rose Weyl Kenworthy; and prior to Joe’s birth, a sister Ruth Nunez Kenworthy who died in infancy. Joe is survived by his wife, Henny, of 74 years; son Joe III and wife Lynda; two daughters, Janett Paige Kenworthy, and Deborah May Carson and husband Charlie; six grandchildren, Joe Kenworthy IV, Chris Kenworthy, Kevin Kenworthy, Bradley Carson, Chad Carson and Paige Carson. In addition, he is survived by seven great grandchildren: Gracie, Tessa, Jaxon, Lauren, Miller, Kara and Carson. Daddy was a beloved husband and father who devoted his life to his family. Per Joe's wishes, no services will be held. Heritage Funeral and Cremation Service is in charge of arrangements

Joseph M. Kenworthy Jr., 100, passed away at his home in Ormond Beach on June 29, 2016. He was born on December 7, 1915, and raised in Philadelphia, PA. He graduated from the University of Pennsylvania with a degree in Mechanical Engineering.... View Obituary & Service Information

The family of Joseph M Kenworthy created this Life Tributes page to make it easy to share your memories.

Send flowers to the Kenworthy family.