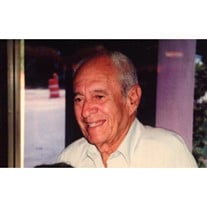 Juan L. Rojas Juan L. Rojas, 86, of Ormond Beach, FL, was born in Santiango, Chile on May 15, 1928 to the late Ricardo and Lucia Rojas and passed away peacefully at home with his family by his side November 19, 2014. Juan was known for his great sense of humor and his huge heart for his family and friends.  He enjoyed horticulture, agriculture, coaching and watching tennis.  Juan accomplished many things in his life. He was past President of Ormond by the Sea Rotary Club 1973-1974 and especially proud of his growing family with four children and eight grandchildren. He is preceded in death by his parents, Ricardo and Lucia Rojas. He will be forever missed by his wife, Janice Rojas, sons, Teddy Rojas and Tony Rojas, daughters, Cristina Rojas Drawdy and Nicole Rojas Moskowitz, brother, Ricardo H. Rojas, sister, Maria Lucia Rojas and grandchildren, Amanda, Kyleigh, Josh, John, Connor, Devon, Joel and Leighton. Arrangements are under the care of Heritage Funeral & Cremation Service, Port Orange.

The family of Juan L. Rojas created this Life Tributes page to make it easy to share your memories.

Send flowers to the Rojas family.