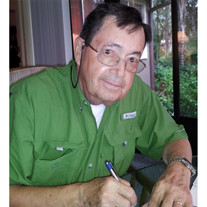 Julian Knox Morrison III Julian Knox Morrison III, “Joe” to his family and friends, passed away at age 84 on March 19, 2014 in Port Orange, FL, due to unexpected complications from a prolonged illness. Joe was born and raised in a Navy family in New London, CT, and thus spent the majority of his youth moving between navy bases up and down the east coast and Hawaii, but affectionately called Washington DC his home.   One highlight from his youth is when he served as a Page for the U.S. Supreme Court (1943-1947).   After attending University of Virginia on a Naval Reserve Officer Training Corps scholarship in 1952 and being commissioned a U.S. Navy Ensign, Joe and his new bride Helen Banks Adams drove across country to Coronado, CA, where he served aboard USS Taussig (DD-746), seeing combat operations in the Korean war.  After this tour, they returned to New London, CT, for submarine training.  Joe then served as one of our nation’s first Regulus-1 guided nuclear missile officers and Executive Officer aboard USS Barbero (SSG-317), in Norfolk, VA, where he earned his Gold Dolphins and became a second-generation U.S. Naval Submarine Officer. In 1958 Joe began his civilian career with Chance Vought Aircraft Corporation in Dallas, TX.  In 1965 he settled back to Washington DC and began a successful analysis and writing career with Research Analysis Corporation (RAC), McLean, VA; Executive Secretary of the American Revolution Bicentennial Commission; Consultant with both the American Institute of Engineers and Architects and the National Research Council; and finally as President of the Washington International Trade Association.  In retirement, Joe and Helen made their home in both Sneedville, TN, and Port Orange, FL. Joe served on numerous boards and councils, as well as several volunteer organizations, including: Mentor in robotics and 3D printers, Academy of Information Technology & Robotics, Spruce Creek High School, 2012-2014; Public Information Officer for Aviation, USCG Auxiliary, 7th USCG District, 2000-2003, Daytona Beach Florida Area (where he was awarded Presidential Unit Citation for surveillance and defense activities following the attacks of 9-11). In addition to his UVA Bachelor’s degree in Physics, with courses in Atomic Physics and Mechanical Engineering, Joe’s formal education includes: American University, post-graduate work in Political Science (History and Philosophy of Science and Technology), 1969-1972; and the George Washington University, School of Business, post-graduate work in International Relations and Affairs, 1968-1971. Joe was a prolific and respected researcher and writer.  While he became an early user and believer in the power of computers, Joe was passionate and well known for his beautiful handwriting and mastery of our written language.  Joe authored articles on Navy guided missile technology, naval history (U.S., UK and Japan) and civilian aviation technology for various publications and local newspapers. Joe was preceded in death by his beloved and devoted wife of 60 years, Helen Banks Adams Morrison. Joe and Helen are blessed with four adored daughters of whom they are extremely proud: Drucilla H. Morrison Urquhart and husband Frederic Urquhart of Port Orange, FL; Helen A. Morrison Puckett and husband Rick Puckett of Sneedville, TN; Julie A. Morrison Barton and husband Steve Barton of Schenevus, NY; and Patricia B. Morrison Acton and husband David Acton of Oak Harbor, WA.  Joe is also survived by his loving brother, Vance H. Morrison and wife Libby of Alexandria, VA. They have six wonderful grandchildren: Kate Urquhart Freeland, Ric Urquhart, Jennifer Barton, Robert Barton, Kristin Acton Betza, and Lauren Acton, and also have one precious great grandson, Jace Freeland. A private memorial service and internment of remains in a family plot at Rock Creek Cemetery, Washington DC, will be conducted at a future date. -David Acton with contributions from Vance Morrison and Helen Puckett. “A man we love very, very much, joined his bride in Heaven yesterday morning.  His heart is once again whole, even though ours are breaking.  We will find peace and comfort knowing that Grandmommy and Papa are together again.  Papa, we loved you through the stars, past the moon and now into Heaven.  We'll see you again.” – Lauren Acton Arrangements are under the care of Heritage Funeral & Cremation Service, Port Orange, FL.

The family of Julian Knox Morrison created this Life Tributes page to make it easy to share your memories.

Send flowers to the Morrison family.