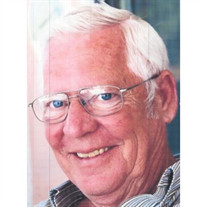 Larry Bruce Anderson Larry Bruce Anderson of Palm Coast, FL was born April 13, 1942 in Ft. Dodge, IA to the late Melvin Anderson and Florence Anderson nee Woods and passed away September 23, 2014 after a long battle with Pulmonary Fibrosis at the age of 72. Larry was raised in both IA and KS, then met the love of his life, Twila Raelene Carr, at Augusta, KS in 1959; they were married on October 8, 1960 and were dedicated to one another ever since. They showed all that knew them that true love does exist. He will be remembered as a loving husband and father, his happy and joking attitude, his Faith in God, and being such a hard working man. Larry and Twila moved and retired from Wichita, KS to Palm Coast, FL in September, 2001. He became a member of the Flagler County Horseshoe Club, working hard to with other members to become a wonderful sanctioned Horseshoe Court within Flagler County, FL. Larry was a spray painter for Cessna Aircraft for 33 years; he was the only person to be promoted to “Paint Operations Manager” with only a high school education. He was known for being a compassionate person and counselor to his employees who often referred to him as “Dad.” He enjoyed fishing, traveling, painting cars for family, friends, and guests who often visited. He was a member of Palm Coast Bible Church, Palm Coast, FL, and truly dedicated his life to the Lord. He lived with bad health since he was 48 years old, but always had a wonderful attitude and outlook on life. He knew God was in control and had a plan for his life. That plan was fulfilled the day he passed onto his “forever home” in Heaven. In addition to Larry’s parents, Larry is preceded in death by his sister, Jean Ozogar nee Anderson. He also is preceded by his two brothers, Randy Anderson and Steve Anderson. Larry is survived by his wife and soulmate, Twila Anderson of Palm Coast, FL, sons David Anderson and wife Michelle of Palm Coast, FL, Michael Anderson and wife Deborah of Wichita,KS. He also leaves behind one daughter Kathryn Abel and husband Donald of palm Coast, FL, 11 grandchildren, 13 great grandchildren, many nieces and nephews who will all think of him as their Dad also. A Celebration of Life will be held at 2:00 Wednesday, October 8, 2014 from the Palm Coast Bible Church, 94 Whiteview Pkwy., Palm Coast, FL. The family requests that everyone is casually dressed for a Celebration of life, not the mourning of a death. For this is the day which the Lord hath made. Let us rejoice and be glad in it. -Psalms 118:24 Friends and other family members may leave their thoughts and condolences by visiting www.HeritageFlagler.com Arrangements are under the care of Heritage Funeral & Cremation Service, Flagler County, FL.

The family of Larry Bruce Anderson created this Life Tributes page to make it easy to share your memories.