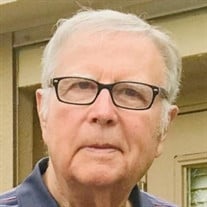 Born in the Netherlands just before WWII, Leo had a difficult start in life. On the ruins of his war ravaged home town of Rotterdam, he received his first full meal from an American soldier in May of 1945, resulting in a great love for everything American. Leo rose above the challenges of growing up during the war. Eager to learn and ambitious to achieve, he flourished in school while building a strong social bond with many around him, such as his soccer teammates at Excelsior, for whom he was a kind-hearted and loyal friend. While completing his military service, Leo met Nelly who would become his best friend and beloved wife of 57 years. Together they built a loving home in which they raised their two children, daughter Bianca and son Patrick. Although Leo worked hard and long throughout his life, he would always have time to spend with his children and help them in any way he saw possible. Leo became a soccer coach who was loved by his pupils and their parents alike. Leo’s family was not complete without dogs, and throughout the years the family enjoyed the love and playfulness that Hettie, Branco, Gaby, Bronca, Clint, Boefie and Noah added to their lives. Leo loved the port of Rotterdam where he and his business partner built a successful forwarding company named Ebrex. Upon retirement, Leo and Nelly followed Bianca who had earlier moved to Florida, and in Palm Coast they enjoyed new hobbies and new friendships under the sun. Leo and Nelly were over the moon when they became the proud grandparents of Rafael and Victor, sons of Patrick and his wife Maria, after which they lived for Sunday family get-togethers via Skype and actual summer vacations in Palm Coast with the whole family. Those never lasted long enough for anyone’s taste. Leo’s kindness, thoughtfulness for others and sense of humor are remembered fondly by all that he crossed paths with. Always looking out for those who are less fortunate, Leo gave back to the communities that he lived in and made part of, as well as the charities that were dear to his heart. We are heartbroken that our beloved husband and sweet (grand)dad left us too early. We are grateful for the wonderful memories that we have made together, and for the joy that living out his values of kindness, thoughtfulness, and togetherness brings us. A life well lived, a man much loved. Rest in peace. Nelly, Bianca, Patrick, Maria, Rafael, and Victor Roos

Born in the Netherlands just before WWII, Leo had a difficult start in life. On the ruins of his war ravaged home town of Rotterdam, he received his first full meal from an American soldier in May of 1945, resulting in a great love for everything... View Obituary & Service Information

The family of Leendert Johannes Cornelis Roos created this Life Tributes page to make it easy to share your memories.

Born in the Netherlands just before WWII, Leo had a difficult...

Send flowers to the Roos family.